Here are Thursday’s minor moves from around Major League Baseball:

Ryan Howard will be out of action for six-to-eight weeks following surgery to repain a torn medial meniscus in his left knee.  While Howard wasn't going to be a trade candidate at the deadline (no team would touch that contract), it's possible his absence might convince the Phillies to throw in the towel on the 2013 season and become full-fledged sellers this month.  Here's the latest from around the NL East…

The Nationals have acquired outfielder Scott Hairston in a trade with the Cubs, FOX Sports' Ken Rosenthal writes. The Cubs received minor league righty Ivan Pineyro in return, tweets Jon Heyman of CBS Sports.  Both teams will also receive a player to be named later, but Cubs GM Jed Hoyer told reporters today that component will "not affect the balance of the deal."  Signed by the Cubs to a two-year, $5MM deal in February, the Cubs will chip in less than $500K toward Hairston's $2.5MM salary for 2014, tweets Heyman. 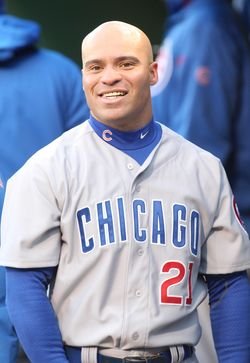 Hairston, 33, has played sparingly this year, hitting .172/.232/.434 in 112 plate appearances, the overwhelming majority of them against lefties. As Amanda Comak of the Washington Times notes, the Nats are about to begin a series against the Phillies in which they'll face three straight lefty starters: John Lannan, Cole Hamels, and Cliff Lee. That means Hairston could get a fair amoung of playing time right away, but generally, the Nationals will likely use him primarily off the bench, just as the Cubs did. Hairston's opportunities will probably come at the expense of fellow righty Tyler Moore, who has hit .151/.195/.283 this season.  Hairston has a .244/.299/.447 line over ten seasons with the Diamondbacks, Padres, Athletics, Mets and Cubs.  He was drafted by the D'Backs in the third round in 2001, at which point current Nationals GM Mike Rizzo was their director of scouting.  Even after acquiring Hairston, the Nationals are looking for a second right-handed hitter to add more depth off the bench, notes MLB.com's Bill Ladson.

Pineyro, 21, was promoted to High-A in mid-June after making the South Atlantic League All-Star team.  In 15 starts overall this year, he has a 3.24 ERA, 8.3 K/9, 2.5 BB/9, and 0.58 HR/9 in 77 2/3 innings.  Prior to the season, Baseball America ranked Pineyro 27th among Nationals prospects, noting that the Dominican held his own against older competition, and "his quick arm is intriguing."  According to BA, Pineyro throws 90-94 with an average to plus changeup and a curveball that needs work.  "If he continues to pitch the way he has been, I think he will be a big league pitcher," Hagerstown Suns pitching coach Franklin Bravo told Ashley Marshall of MLB.com in late April.

The Cubs have announced outfielder Tony Campana has been designated for assignment. The move was made to clear a spot on the 40-man roster for Scott Hairston, whose two-year contract was made official in a team press release.

Campana's main asset is his speed as he led the Cubs in stolen bases last year with 30, the ninth best total in the National League. The 26-year-old finished 2012 with a slash line of .264/.308/.299 in 192 plate appearances. Campana became expendable after the Cubs bolstered their outfield this winter, according to MLBTR's Transaction Tracker, with the free agent signings of Hairston and Nate Schierholtz.

"It was a difficult call for us," Cubs President Theo Epstein was quoted as saying by Paul Sullivan of the Chicago Tribune. "I think it speaks to the fact that our 40-man roster is starting to have better depth on it. We preferred not to take a pitcher off at this juncture. So, looking at the position player group, it seemed to make sense to us to make this procedural move with Tony."

Epstein said he would like to keep Campana in the organization, but added he could be a weapon for a contending team in a certain role. The Cubs have 10 days to trade Campana or place him on waivers.

JANUARY 23rd: The Cubs have reached an agreement with outfielder Scott Hairston for a two-year deal pending a physical, reports FOXSports.com's Ken Rosenthal (via Twitter). The Excel Sports Management client could receive up to $6MM over the course of the two years including incentives, according to Bruce Levine of ESPNChicago.com (via Twitter).

Hairston, 32, enjoyed a career year in 2012 with the Mets as he posted a .263/.299/.504 batting line while playing each of the outfield positions. The veteran's ability to hit left-handed pitching made Hairston a top commodity this offseason given his .867 OPS against southpaws this season.

Adding Hairston to the Cubs' outfield mix should lessen some of the offensive burden for left-handed hitters like David DeJesus and Nate Schierholtz, both of whom struggle against left-handed pitchers. Schierholtz and Hairston project to serve as what could be an effective platoon in right field given Schierholtz's success against right-handed pitchers (.811 OPS over the past two seasons).

Yesterday, the Yankees avoided arbitration with David Robertson on a one-year, $3.1MM deal, meaning that they have now come to terms with all five of their arb eligible players.  All things considered, it has been an unusually quiet offseason for the Bombers as they look to tighten their belt for 2014.  Were they close to making other moves along the way?  Here's more on that and other news on the Yankees..

The Phillies made headlines yesterday, signing Delmon Young to a one-year deal. Here’s the latest on some of Philadelphia’s NL East rivals…

The Mets completed a nine-figure contract extension and made a blockbuster trade this winter, but they’ve been quiet in free agency. Mike Puma of the New York Post has the latest on their current pursuits…