Veteran left-hander Matt Thornton has decided to retire, reports ESPN’s Jerry Crasnick (on Twitter). The 40-year-old spent his final big league season in the Padres organization but was limited to 17 innings due to an Achilles strain and was released in mid-August. 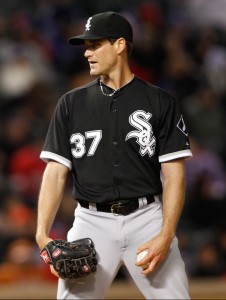 Originally selected by the Mariners with the 22nd overall pick of the 1998 draft, Thornton didn’t make his big league debut until his age-27 season in 2004 and didn’t establish himself as a quality bullpen piece until his age-29 campaign. Traded from the Mariners to the White Sox in exchange for light-hitting outfielder Joe Borchard, though, Thornton blossomed on Chicago’s south side and eventually became one of the game’s premier left-handed setup men. From 2008-10, Thornton recorded a 2.70 ERA with 11.0 K/9 against 2.7 BB/9, showing a mastery over left-handed hitters and right-handed hitters alike thanks in large part to a fastball that averaged just shy of 96 mph.

Those three seasons may have represented Thornton’s peak, but the lefty was predominantly excellent for the better part of a decade from age 29 through age 38. In that time, Thornton recorded a 3.11 ERA and averaged just under a strikeout per inning. Overall, the lefty’s career will come to a close with a losing 36-46 record but a very solid 3.41 ERA, a 1.28 WHIP, 23 saves, 206 holds (164 of which came with the White Sox — a franchise record), 8.7 K/9, 3.4 BB/9 and a 48.2 percent ground-ball rate in 662 2/3 innings as a Major Leaguer. Thornton earned more than $28MM in his Major League career, per Baseball-Reference (plus a $925K signing bonus). We at MLBTR wish Thornton continued success in his post-playing days and offer a hearty congratulations on an impressive career.

The 39-year-old Thornton signed a minor league deal with the Padres last offseason. He missed most of the first two months of the year with Achilles tendinitis, then struggled in 17 innings with San Diego, posting a 5.82 ERA, 4.8 K/9 and 3.2 BB/9. His velocity has dropped from the mid- to high 90s as a member of the White Sox several years ago to 91.4 MPH this year, likely a key factor to his steadily declining strikeout rate over the past few seasons. He has a 3.41 ERA, 8.7 K/9 and 3.4 BB/9 in parts of 13 years in the big leagues.

Major League Baseball’s collective bargaining agreement contains a provision that allows certain free agents who are signed to minor league contracts to receive a $100K retention bonus if they are not on the team’s 25-man roster or the Major League disabled list five days prior to the season.

Here’s the latest news from around the league on Article XX(B) signees and their roster statuses with their respective teams (newest updates on top):

The Dodgers’ investment in righty Yaisel Sierra will begin at $30MM, per a tweet from Jon Heyman of MLB Network, but could go up from there. Sierra will have the right to opt into salary arbitration if he becomes eligible. His contract will pay him a $6MM signing bonus and then salaries of $1MM, $2.5MM, $3.5MM, $4MM, $5.5MM, and $7.5MM, per the report.

Here’s more from Los Angeles and the rest of the NL West:

The Padres have reached agreement on a minor league deal with lefty Matt Thornton, according to Ken Rosenthal of FOX Sports (via Twitter). He is undergoing a physical today and will join the team in major league camp if he passes.

The deal will pay Thornton at a $1.6MM base salary if he can crack the MLB roster, Chris Cotillo of SB Nation tweets. It also includes $1.9MM in available incentives relating to his number of appearances.

Thornton, 39, saw his strikeout rate fall last year but continued to post excellent results while being tasked with a fairly light workload. Though he’s now within eyesight of 40, the southpaw owns a 1.98 ERA over 77 1/3 innings over the prior two seasons.

While he’s been particularly stingy against lefties, Thornton has also posted solid numbers (sub-.700 OPS against) in his exposure to right-handed pitching in that span. He’s finally experienced a bit of a downtick in velocity, but still brought his average heater at around 93.5 mph last year.

It’s easy to buy into Spring Training hype, Nick Cafardo of the Boston Globe notes in his latest column as he looks at some of the major Red Sox storylines heading into camp.  While the Sox have drawn mostly approval for their offseason dealings, Cafardo warns that pundits were saying the same thing last year prior to Boston’s last place season.  Here’s some more from Cafardo’s piece…

Today represents the forty-year anniversary of the advent of modern free agency, as Yahoo Sports’ Jeff Passan explores. The piece includes some interesting quotes from some of those involved at the time.

As the market marches forward this winter, here’s the latest:

The Tigers are interested in Yankees left-hander Justin Wilson and have, in fact, had trade talks with the Yankees about their lefty setup man, reports Marly Rivera of ESPN (via Twitter). It’s not clear how far talks between the two sides progressed, but the Tigers have a known need for a left-handed reliever, and the Yankees have been open-minded about dealing almost any player on their roster. Wilson, who has three years of club control remaining, is in his prime at 28 years of age and has a lifetime 3.03 ERA with 8.7 K/9 against 3.7 BB/9 in 199 1/3 innings between the Pirates and Yankees.

A few more notes on the relief market…

It appears the Rangers are at least looking into an impactful pitching addition. MLB.com’s T.R. Sullivan says (Twitter links) that the club has pursued Jose Fernandez, Shelby Miller, and Drew Smyly on the trade market, but “couldn’t make headway” on any of those players. The club is, however, holding a line of dialogue with the Indians on their rotation arms. Meanwhile, Texas has “neither funds nor interest level” to take a run at Japanese righty Kenta Maeda, Evan Grant of the Dallas Morning News reports on Twitter.

Here’s more on the pitching market:

Orioles executive VP of baseball operations Dan Duquette said today that his club is hoping to tie up an agreement with top free agent reliever Darren O’Day in short order, as Rich Dubroff of CSNmidatlantic.com tweets. “We’re continuing to work on that Darren O’Day project,” said Duquette. “We’re going to try to bring that to a head here in the next couple of days.”

Here’s more on an active market for relievers: