Geovany Soto is having a fantastic offensive season and, as Joe Mauer, Kurt Suzuki, Chris Iannetta and many others will tell you, catchers who can hit are sometimes offered extensions once they qualify for arbitration. Soto will head to arbitration for the first time this winter and barring a September slide, he'll be coming off a big season.

The 27-year-old ranks among the top five catchers in baseball when it comes to batting average, on base percentage and home runs. He has hit well before, but even when he won the NL Rookie of the Year in 2008 his batting line wasn't as high as it is now (.284/.399/.521).

The Cubs may prefer to go one year at a time with Soto, but they could opt for cost certainty and lock their catcher up. As the table below shows, both Soto's rate stats and his cumulative stats fall between the numbers Brian McCann and Chris Iannetta had going into their first arbitration season. 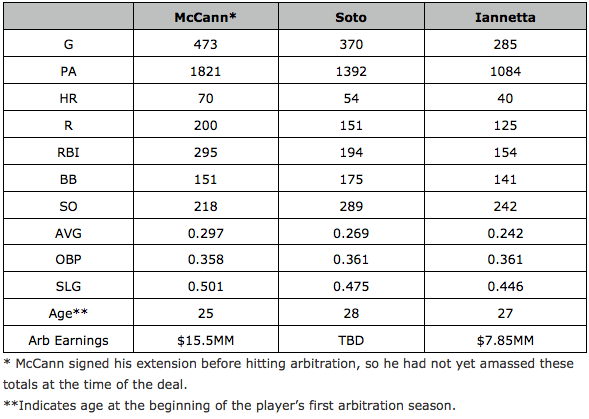 Both McCann and Iannetta signed extensions covering their arbitration years, so they are reasonable comparables for Soto. McCann ($15.5MM) earns more than Iannetta ($7.85MM) for his three seasons of arbitration eligibility and it seems likely that Soto will earn somewhere in between if the Cubs lock him up. McCann signed his deal early in his career, when he had less leverage, so it seems likely that Soto could command nearly as much for his three arbitration seasons as McCann got for his, especially given Soto's massive 2010 numbers. Perhaps the Cubs could buy Soto's 2011-13 seasons for $14MM or so.