Freddy Garcia continues to indicate that he'd prefer to spend 2011 playing outside of Chicago, despite recent reports that the White Sox are still considering him. Last Wednesday, he stated his goal to pitch for the Yankees this season, while not explictly ruling out out Chicago or any other team. But in a recent interview with Leonardo Mendoza and Francisco Zambrano from the Venezuelan paper Lider en Deportes (link in Spanish), Garcia seemed ready to say goodbye to the South Side:

"I would love to stay in Chicago because I like the city and I have friends here, but I don't think I'm going to come back," Garcia said. "In any case, I appreciate them for trusting me last year; however, a team like New York would be ideal, and would match up with this stage of my career."

Were he to head East, Garcia would presumably slot behind Phil Hughes in the Yankees' rotation, leaving the fifth spot open for contention among a group including rookies Ivan Nova and Andrew Brackman and veterans Bartolo Colon and Sergio Mitre. With Andy Pettitte's return far from a sure thing, and Joba Chamberlain looking more like a trade chip than a starter, a healthy Garcia could help the Yankees buy time in the short term to continue weighing their long-term options.

MONDAY: It's a $1.625MM deal that includes some performance bonuses, according to the AP (via the Dayton Daily News).

SUNDAY: The Reds and Edinson Volquez have avoided arbitration, coming to terms on a one-year deal, writes MLB.com's Mark Sheldon.

While no financial terms have been released yet, ESPN's Enrique Rojas reported that a deal would likely be in the $1.6MM range yesterday when we learned the two sides were nearing a deal.

Volquez, 26, returned from Tommy John surgery last season to throw 62 2/3 quality innings. The right-hander, who was acquired by Texas in exchange for Josh Hamilton in 2007, posted a 4.34 ERA while striking out 67 hitters. He featured his typical shaky command (5.0 BB/9 in 2010, 4.7 for his career), but he showed no loss of velocity, as his 93.6mph average was the same as his career mark.

The Mets and R.A. Dickey have avoided arbitration and agreed to a two-year deal with a third year club option, the team announced. Andy Martino of The New York Daily News, who first reported the agreement, says Dickey will make $7.5MM total for the two guaranteed years of the deal, excluding the option year and incentives (Twitter link). The contract is official, now that Dickey has passed his physical, according to Adam Rubin of ESPNNewYork, who says the deal is believed to guarantee $7.8MM (Twitter link).

When doctors performed Dickey's physical, one thing they're didn't find was a UCL in his right elbow. The 36-year-old knuckleballer is famously missing the all-important ligament, something Texas Rangers' doctors first discovered when they drafted him in 1996.

Dickey has bounced from team to team for most of his career, but he broke out with the Mets last season. After being recalled from Triple-A in mid-May, he pitched to a 2.84 ERA with 5.4 K/9, 2.2 BB/9, and a 55.1% ground ball rate in 174 1/3 innings. Given the nature of the knuckleball, that walk rate is mighty impressive.

“R.A. had a breakthrough season for our organization last year, meriting this new contract,” Mets GM Sandy Alderson said. “We expect R.A. to be a major part of our success going forward.”

As our Arbitration Tracker shows, Dickey filed for $4.7MM in arbitration while the team countered with $3.35MM, prompting Ben Nicholson-Smith is name his arbitration case one of ten to watch. Dickey would have been eligible for free agency after the 2011 season.

The Yankees would like a certain left-handed starter and the Mets are looking for the right minority owner. Here's the latest on baseball's two New York teams:

Justin Duchscherer is the latest pitcher to decline the Nationals' overtures and sign elsewhere, but he's certainly not the only one. The Nationals showed interest in Zack Greinke, Cliff Lee, Carl Pavano, Jorge de la Rosa, Chris Young, Javier Vazquez, Brandon Webb and Jeff Francis this offseason, without landing any of those pitchers.

It's not unusual for teams to check in on a number of free agents and potential trade targets and it's not like GM Mike Rizzo wanted to sign all of the starters he expressed interest in. The Nationals aren't necessarily surprised or disappointed to have missed out on free agents in whom they had just passing interest.

But the Nationals did have trouble attracting elite pitchers like Lee and Greinke to Washington this winter. Earlier in the month, Rizzo told Thomas Boswell of the Washington Post that luring free agents to D.C. isn’t easy.

"It shows the difficulty of trying to build something," Rizzo said. "The only thing that convinces players to come is winning. It's the chicken and the egg. Which comes first? Do you win and then the players come, or do the players come and then you win?"

The Nationals sidestepped free agency and acquired Tom Gorzelanny in a trade with the Cubs, but only after missing out on another offseason trade target, Matt Garza. The Nationals were willing to spend in free agency, but did not surrender the trade chips required to acquire a pitcher of Garza's caliber.

Gorzelanny joins Livan Hernandez, Jason Marquis, John Lannan and Jordan Zimmermann in a rotation that will include Stephen Strasburg once he recovers from Tommy John surgery. It's a passable rotation, but the Nationals had hoped for more. If and when they start winning, luring free agent arms to D.C. will likely be easier, but Rizzo has a challenge before him until then.

The Orioles have agreed to sign Mark Hendrickson to a minor league deal with an invitation to Spring Training, according to Jeff Zrebiec of the Baltimore Sun (Twitter links). Hendrickson had an offer from the Rockies, but chose to return to Baltimore, where he'll compete to be a situational left-hander and long reliever. Dan Connolly of the Sun reports that the deal is worth about $900K if Hendrickson makes the team (Twitter link).

The Rays and Orioles also expressed interest in Hendrickson earlier in the offseason. Hendrickson, who played for four NBA teams before focusing on baseball, is now with his fifth MLB club.

The Marlins signed Greg Dobbs to a minor league deal with an invitation to Spring Training, according to MLB.com's Joe Frisaro (on Twitter). The team also officially announced the signing of Shawn Hill.

Most of Dobbs' big league experience comes at third base, but he has experience at all of the corner infield and outfield positions. Dobbs' managers have always shielded him from left-handed pitching, since he struggles against southpaws.

I'm writing a series of guest posts at FanGraphs, one of the first places baseball fans go for top analysis and stats. Today, I examine the Braves and show how they avoided free agency this winter. Next offseason will likely be different, though. Click through to see what lies ahead in Atlanta.

Hunter Pence and his representatives at Beverly Hills Sports Council likely took notice when Mike Napoli and the Rangers agreed to a $5.8MM salary for 2011. And Pence’s agency will probably be watching the cases for Luke Scott and Delmon Young just as carefully (keep track of all arbitration submissions with MLBTR's Arb Tracker).

Pence, a super two who is arbitration eligible for the second time, asked for more money than Scott, Napoli, or Young even though the Astros outfielder is a year further from free agency than the others. Pence can ask for $6.9MM through arbitration, since his career totals compare well with players like Scott and Young, who are on track to hit free agency after 2012. 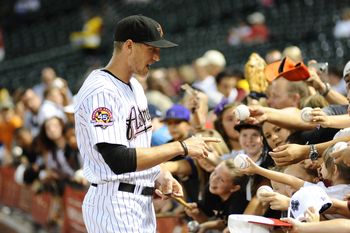 Pence doesn’t have as much big league experience as Scott, Napoli or Young, but he has more career runs and stolen bases than any of them and comparable home run and RBI totals. Pence is also working from a relatively high base salary ($3.5MM) and is the only one of the players above to have made an All-Star team.

Length and consistency of career contribution matter in an arbitration hearing, which plays in Pence’s favor. He has appeared in 156 games or more in each of his three full seasons, hitting exactly 25 homers three times in a row. He has finished the past two campaigns with a .282 batting average, so it shouldn’t be hard for BHSC to show that Pence has been consistent and durable.

Pence is far from a perfect player; he has been successful just 61% of the time he has attempted to steal bases and doesn’t walk as much as Scott or Napoli. But it's his $6.9MM asking price that could become his biggest problem. Napoli, a comparable player in terms of career accomplishments, settled for $5.8MM. Carlos Quentin, another comparable player, already settled for $5.05MM, reducing the others’ leverage.

Young ($6.25MM) and Scott ($6.85MM) filed for less than Pence, but they could still help their fellow-outfielder by winning in arbitration. If they lose or settle, however, Pence will have a hard time explaining that he’s worth more than the $6.025MM midpoint (the Astros filed at $5.15MM) when comparable players are making $5-6MM.

Pence and the Astros are headed to arbitration soon and what happens with Scott and Young could have a major impact on how much the Astros are paying their right fielder for 2011 and beyond.

MONDAY: Looper's deal pays him $1MM if he makes the team and includes about $2MM more in incentives, according to ESPN.com's Jerry Crasnick (on Twitter).

Looper, 36, last pitched for the Brewers in 2009.  He threw for the Cubs before the 2010 season, but ultimately decided to sit out.  Looper converted to starting in 2007, making 97 starts over a three-year span.  He limits walks and keeps the ball on the ground fairly well, and could find innings with the Cubs if one of their starting five gets injured.

Ojeda, 36, broke into the Majors in 2000 with the Cubs.  He's also served as a middle infield backup for the Twins and Diamondbacks.  Ojeda was non-tendered by Arizona at the December deadline after earning $825K in 2010.

In total the Cubs invited 21 non-roster players to Spring Training, including Reed Johnson, Todd Wellemeyer, and Scott Moore.  The team decided to bring in multiple veterans they knew from previous stints.