Former second baseman Jeff Kent has been up for Hall of Fame consideration for a decade, with this year marking his last crack at induction via the Baseball Writers Association of America. Kent received 46.5% of the the vote during this cycle, well shy of the 75% needed for induction. He falls off the ballot and will no longer be considered by the BBWAA.

Kent hovered in the 25-50% vote share range for his final four seasons. He never seemed in danger of falling below the 5% threshold that cuts players from the ballot early but also didn’t get the kind of late momentum needed to vault him within striking range of induction. If he’s to be enshrined in Cooperstown, that’ll now have to come via the Era Committee. The Contemporary Baseball Era Players Committee met this winter — enshrining Fred McGriff in the process — meaning the earliest Kent will be under consideration again is the 2025-26 offseason.

Kent finished his career with a .290/.356/.500 line in more than 9500 plate appearances. His 377 career homers are the most by any primary second baseman, while he collected 2461 hits, drove in 1518 runs and scored 1320 times. He was a five-time All-Star and secured four Silver Slugger awards while winning the aforementioned MVP. Strong as his offensive contributions were, Kent faced plenty of questions about his glove at the keystone. Those defensive concerns dissuaded enough voters to keep him from induction.

While Kent was the only player to “age” off the ballot this year, a number of first-time candidates unsurprisingly dropped out after not reaching the 5% threshold to last another season. Bronson Arroyo, R.A. Dickey, John Lackey, Mike Napoli, Huston Street, Matt Cain, Jacoby Ellsbury, Andre Ethier, J.J. Hardy, Jhonny Peralta, Jered Weaver and Jayson Werth each fall out of future consideration.

Among first-time candidates, just two topped the 5% mark to remain on the ballot for at least another year. Carlos Beltrán debuted at 46.5% and would seem to have a solid chance at induction at some point down the line. Francisco Rodríguez has a more uphill battle after starting off at 10.8% of the vote.

Orioles standout Manny Machado showed up to camp Saturday and told reporters (including Bob Nightengale of USA Today, via Twitter) that he and the team have not discussed a long-term extension. Interestingly, the soon-to-be free agent added that he’d like to line up at shortstop for the rest of his career. Machado, 25, has played the majority of his career at third base since debuting in 2012, but the O’s decided to move him back to shortstop – his original position – last month. “This is where my heart has always been,” Machado said of short (Twitter link via Brittany Ghiroli of MLB.com). Barring an unlikely extension before next offseason, Machado will easily be the premier shortstop option available in a star-studded free agent class. In the meantime, if he thrives at short this year, Machado will have a chance to earn a bit more than his $16MM salary. He’d make an extra $100K by winning a Gold Glove Award and $250K by taking home Platinum Glove honors, Nightengale tweets.

A couple more notes on Baltimore…

The Orioles have recently begun talks with free agent righty Lance Lynn, according to Ken Rosenthal of The Athletic (subscription link), though the report also suggests that there’s no particular momentum toward an agreement. It’s still anyone’s guess how the Baltimore rotation will be filled out. Despite entering the winter with three open starting jobs, the O’s only 40-man rotation addition to this point is Michael Kelly, a minor-league free agent who has yet to appear in the majors. With Lynn’s own market still largely undeveloped, it’s not surprising to hear of this link, though the question remains whether the Orioles will really open the pocketbook for a starter.

Mariners GM Jerry Dipoto understandably regrets the deal that sent Chris Taylor to the Dodgers,telling Matt Calkins of the Seattle Times that “it’s clearly the worst deal I’ve ever made.” The veteran baseball executive surely had little reason to expect Taylor to break through as he has, but he still says he “whiffed” by parting with such a controllable player for a pitcher (Zach Lee) that has not worked out.

More from out west:

After going without him in the NLCS, the Dodgers have officially activated star shortstop Corey Seager for the World Series. Given his balky back, however, the team may look to  him as a DH for the games played in Houston, as J.P. Hoornstra writes in the Orange County Register. Those interested in some reading in advance of the Fall Classic may also like to check out the Register’s Bill Plunkett’s piece on the analytics-driven organizations squaring off this year.

The Braves announced on Monday that they’ve exercised their $4MM club option on catcher Tyler Flowers and declined their $8MM club option over R.A. Dickey in favor of a $500K buyout. Dickey will receive that $500K payout even if he decides to retire, MLB.com’s Mark Bowman tweets. Atlanta also announced that Flowers underwent an arthroscopic debridement surgery on his left wrist on Oct. 9, though the press release states that he’s expected to be ready for Spring Training 2018. 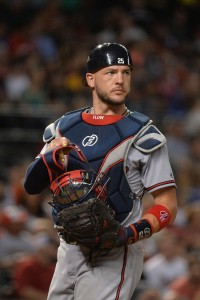 The decision to exercise Flowers’ affordable option was among the easiest calls in baseball this offseason. The 31-year-old Flowers (32 in January) enjoyed a career year at the plate, hitting .281/.378/.445 with a dozen homers and 16 doubles. He also rated as baseball’s top pitch-framing catcher, per Baseball Prospectus, and he halted 23 percent of stolen base attempts against the Braves’ pitching staff in 2017. Flowers will once again pair with Kurt Suzuki, who signed a late-season extension with the Braves, to shoulder the bulk of the catching duties for the Braves in 2018.

Dickey, 43 this weekend, was one of three veteran acquisitions for the Braves’ rotation last offseason and proved to be the only one that truly panned out. Bartolo Colon was released over the summer, while Atlanta was content to simply allow the Twins to eat the remainder of the salary on left-hander Jaime Garcia’s contract and took less in return than they surrendered to acquire Garcia when dumping him on Minnesota. 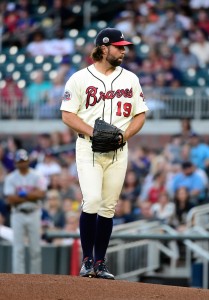 Dickey, though, proved to be exactly what the Braves hoped: a stabilizing innings eater that soaked up some starts while the Braves’ young arms continued their development in the upper minors. The knuckleball specialist took the hill 31 times for the Braves, with his final outing of the year representing his 300th career start and his 400th career MLB appearance. In those 31 starts, he logged 190 innings with a 4.26 ERA, 6.4 K/9, 3.2 BB/9 and a 46.9 percent ground-ball rate.

There’s been talk that the 2017 season may have been the final chapter of Dickey’s career, though his overall performance certainly seems to suggest that he could return for a 16th Major League season if he still has the desire to continue pitching.

The Braves, clearly, are now set at catcher with Flowers and Suzuki in tow for the 2018 campaign, but their rotation presents a far bigger question mark. Julio Teheran and Mike Foltynewicz both struggled through pedestrian campaigns in 2017, while top prospect Sean Newcomb yielded slightly better results but continued to demonstrate sub-par control. Each of Lucas Sims, Luiz Gohara and Max Fried made his MLB debut for the Braves in 2017, but none from that group of top prospects saw enough time or experienced enough success to be considered locks to hold down a 2018 rotation spot. Atlanta also has former top prospects Aaron Blair and Matt Wisler on the 40-man roster, but neither has created much cause for optimism in the Majors to this point in his career.

Suffice it to say, while the Braves possess a wealth of intriguing upper-level arms, it’d be something of a surprise if the team did not once again look to bring in some veteran arms to augment a young core of talented but unproven rotation candidates.

The Braves are still waiting to see where the MLB investigation into international signing violations will lead. David O’Brien of the Atlanta Journal-Constitution has the latest on that situation, though it’s mostly a holding pattern. O’Brien also notes that his expectation is that veteran righty R.A. Dickey will choose to walk away from the game even if the club intends to pick up his $8MM option. Per O’Brien, it “seemed since he last week of the season that [Dickey] was leaning heavily toward retiring.”

Within his latest AL Notes column, FanRag’s Jon Heyman writes that Royals GM Dayton Moore doesn’t appear to be going anywhere despite rumors about him possibly taking over the Braves’ front office. Moore, who cut his teeth in the front office world as a Braves exec, has been an oft-rumored replacement for John Coppolella in Atlanta following his resignation as general manager.

In other Royals news, the team is planning to give a qualifying offer to center fielder Lorenzo Cain, though the team hasn’t firmly decided on that option just yet, per Heyman. It seems like a no-brainer in my view. Despite the fact that Cain will be 32 next season, he hit .300/.363/.440 season at the plate with15 homers and swiped 26 bases while playing elite center-field defense in 2017. The Royals undoubtedly expect Eric Hosmer and Mike Moustakas to reject QOs, so the minimal risk of Cain accepting would hardly put an exorbitant strain on payroll, though it’d limit their maneuverability for the remainder of the winter. Cain should be able to shatter that mark even with draft compensation attached to him. Heyman also notes that hitting coach Dale Sveum will now be the team’s bench coach, replacing the departed Don Wakamatsu. As such, the Royals are on the hunt for a new pitching coach and a new hitting coach to step into Sveum’s spot.

A few more items of note…

Veteran knuckleballer R.A. Dickey is considering retiring at the end of the season, he tells David O’Brien of the Atlanta Journal-Constitution. “It’ll just be a family decision,” he says. “We have made no official decision at all, but we certainly have had conversations around both coming back or retiring.”

The Braves have an $8MM option or a $500K buyout on Dickey for 2018, but it appears Dickey’s decision will be somewhat independent of the Braves’ decision about whether to pick up that option. (The Braves’ plans aren’t yet clear, although 69% of MLBTR readers feel the Braves should exercise the option after a season in which Dickey ate 190 innings and was generally productive.) GM John Coppolella previously alluded to the fact that Dickey could retire despite the option, and Dickey tells O’Brien he could consider playing elsewhere if the Braves do not retain him (although it would have to be the “perfect spot,” naming Cincinnati and St. Louis as other cities that are reasonably close to his offseason home in Tennessee).

Dickey declined the opportunity to pitch for the Braves in their season finale tomorrow, which means he’ll finish the season with 400 career appearances and 300 career starts — good round numbers to finish his career on, he points out. He has a 4.04 career ERA with 120 wins and the 2012 NL Cy Young award to his credit. He’ll turn 43 next month.

Here’s the latest from out of Atlanta, via a highly informative column from Mark Bradley of the Atlanta Journal-Constitution: