The White Sox are next in our Offseason In Review series. 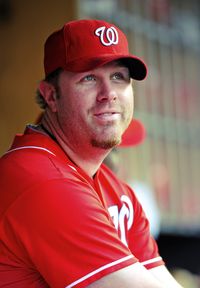 Dunn hit his standard 38-40 home runs in 2010, though he drew about 40 fewer walks than usual.  The slugger wasn't expected to accept a full-time DH job, but National League teams weren't calling and the White Sox offered him a chance to play for a contender without taking a discount.  Power always comes at an inflated price on the free agent market, but Dunn should provide a reliable middle of the order bat for Chicago.  Keep in mind that the signing came before the Sox knew they'd be able to retain Konerko.  Dunn came with the added cost of the #23 overall draft pick, which perhaps the White Sox could stomach because they are starting to build up depth in the lower minors.

The White Sox came close to losing Konerko to the Diamondbacks but ultimately compensated him well for a season that saw him place fifth in the AL MVP voting.  That Konerko's monster year came at age 34 made the term a tricky issue, as the Sox probably would have preferred not to guarantee three years.  Konerko was able to rest by playing 23 games at DH last year, a luxury he'll continue to have when Dunn plays first base on occasion.  That was not an option when Jim Thome was on the club and healthy.

Similarly, the White Sox retained Pierzynski at the last minute.  He nearly signed a deal with the Dodgers, which would have caused Williams to turn to Miguel Olivo.  I don't mind the signing, as reliable everyday veteran catchers are a rare commodity.  The White Sox could have reduced Pierzynski's free agent leverage by offering arbitration to the Type A free agent, but given the value of the relationship and their desire to re-sign him, plus his potential large one-year salary from the process, I can understand the choice.

Faced with the major bullpen losses of Jenks and Putz, Williams committed a hefty $17MM for five seasons of Crain and Ohman.  They made the Crain commitment even while acknowledging the burden Linebrink had become by assuming over 60% of the latter's salary to convince the Braves to take him.  The key members of last year's bullpen – Jenks, Putz, Thornton, and Sergio Santos, were all acquired on the cheap, so it was odd to see the Sox open the checkbook here – especially since they'll have an added weapon in a full season from Chris Sale.  Still, perhaps the team's thinking was that they were simply re-allocating Jenks' money to other relievers.

Ramirez is an underrated player, a rare shortstop who contributes offensively and defensively.  Locking him up at a reasonable price for potentially three free agent seasons looks like a strong move.  Thornton's extension was more of a necessary evil, with the club option making it more palatable.

Even if Konerko regresses, the Sox could have an improved offense given the addition of Dunn and possible improvement from Gordon Beckham.  The team's success may hinge on the health of the rotation, particularly Jake Peavy.  The Sox don't have much depth if a starter or two has to miss significant time, though they're not alone in that regard.