There's no question about it at this point – the Pirates are buyers. The Pirates and Orioles announced tonight that the Pirates acquired Derrek Lee from Baltimore for minor league first baseman Aaron Baker. 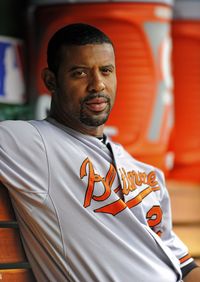 “He is an experienced, productive right-handed hitter and solid defender who should add to our team on thefield and in the clubhouse,” Pirates GM Neal Huntington said in a statement.

Though his contract expires after the season, Lee doesn't project as a ranked free agent, so he probably won't be tied to draft pick compensation.

Dan Connolly of the Baltimore Sun broke the news and MLB.com's Jenifer Langosch, Rob Biertempfel and Dejan Kovacevic of the Pittsburgh Tribune-Review also contributed to the story.  Photo courtesy of Icon SMI.