The Blue Jays have signed 37-year-old designated hitter Vladimir Guerrero to a minor league contract, the team announced. The Proformance client would earn a pro-rated portion of $1.3MM in the Major Leagues, according to Ken Rosenthal of FOX Sports, who first reported the deal (Twitter links). 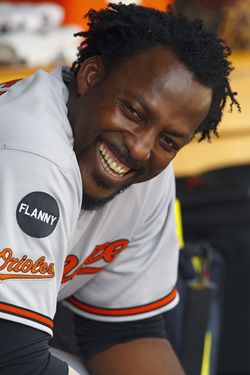 If Guerrero's bat looks good at extended Spring Training (his next stop) the Blue Jays could make some changes to their lineup. Assuming the Blue Jays don't consider Guerrero an option in the outfield, he'll pinch hit and DH. They could have Guerrero DH against left-handed pitching and shift Adam Lind to the bench against southpaws, with Edwin Encarnacion playing first base. Encarnacion, the team's best hitter so far in 2012, will continue to play every day, but it seems Lind could eventually lose playing time as a result of the signing.

Blue Jays GM Alex Anthopoulos, a former Montreal Expos employee, has expressed admiration for Guerrero in the past. Anthopoulos has said throughout the spring that he'd be open to adding players on low-risk minor league deals.