12:30pm: The team has officially announced the five-year extension with a press release.

FRIDAY: The Diamondbacks and catcher Miguel Montero have agreed to a five-year, $60MM contract extension, reports Jon Paul Morosi of FOX Sports (Twitter link). The deal is the richest in Arizona club history and is expected to be announced at a press conference tomorrow.  ESPN's Buster Olney reports (via Twitter) that the contract doesn't afford Montero any no-trade protection. 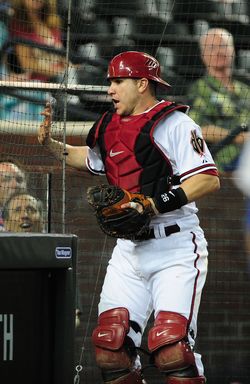 The two sides had been discussing an extension over the winter and had seemingly tabled negotiations, though GM Kevin Towers said earlier this month that the D'Backs were open to in-season talks.  Montero was scheduled to hit free agency this winter and would have been one of the more sought-after players on the market.  Montero, an Octagon client, turns 29 in July.

Montero can probably thank Yadier Molina for his five-year, $75MM extension with the Cardinals in March that raised the bar for catcher contracts.  As Nick Piecoro of the Arizona Republic points out on Twitter, the D'Backs originally offered Montero a four-year, $32MM deal in late February before talks broke off.  Montero's wish for a contract similar to Victor Martinez's four-year, $50MM deal with the Tigers was more than granted in terms of length and dollars, if not in average annual value.  Still, Montero's contract will award him the fifth-highest AAV for any catcher — Martinez is not included in that group since he has mostly been a DH since going to Detroit.