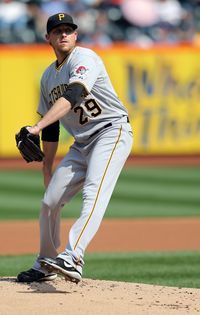 The 32-year-old Lapa & Leventhal client spent last season with the Pirates where he pitched to a 4.21 ERA in 171 innings with a 4.7 K/9, 2.4 BB/9 and strong 51.2 percent ground-ball rate. He'll join Vance Worley and Scott Diamond in a Twins rotation that will also likely include 2009 first-rounder and eventual Tommy John victim Kyle Gibson.

Twins general manager Terry Ryan has emphasized starting pitching all offseason. He's already traded Denard Span and Ben Revere in order to acquire Worley and a pair of high-upside arms in Alex Meyer and Trevor May. With uncertainty still in the 2013 starting rotation and money to spend, it wouldn't be a surprise to see the Twins pursue additional help via free agency.

Correia's two-year deal is similar to the two-year, $8MM pact he signed with the Pirates two years ago. A fourth-round selection of the Giants in 2002, Correia has spent his entire career in the National League between the Giants, Padres and Pirates. In that time, he's compiled a 4.54 ERA, 6.0 K/9, 3.2 BB/9 and 44.3 percent ground-ball rate in 1066 innings.

Correia reportedly received multiple multi-year offers, including one from Japan. In addition to the Twins, he was connected to the Royals and Orioles at the Winter Meetings last week.