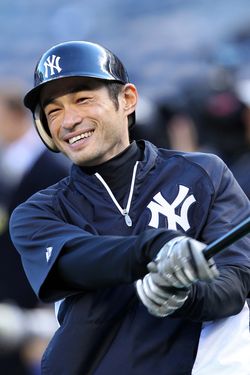 The Yankees have pursued a strategy of signing veterans (such as Kevin Youkilis, Andy Pettitte and Mariano Rivera) to one-year deals this winter, but were forced to make a two-year commitment to the 39-year-old Ichiro due to competing multiyear offers. The Phillies pushed hard for Ichiro and offered him a two-year, $14MM deal, while the Giants were believed to have offered the outfielder a two-year, $15MM contract. While the other offers were larger, Ichiro took the Yankees' contract after telling the team he wanted to remain in New York.

Ichiro will join two other left-handed hitters in New York’s outfield: Curtis Granderson and Brett Gardner. The team is exploring the idea of adding a right-handed complement to the group, FOX Sports' Ken Rosenthal reported earlier this offseason.

Jon Heyman of CBSSports.com and WFAN's Craig Carton first reporting the deal was done (on Twitter). Rosenthal, ESPN's Buster Olney, Mark Feinsand of the New York Daily News, Joel Sherman of the New York Post, and the New York Times' David Waldstein all added information about the various aspects of the signing.

Mark Polishuk and Mike Axisa also contributed to this post. Photo courtesy of US Presswire.