The Dodgers' offseason spending continues, as they've officially announced the signing of J.P. Howell to a one-year deal. Howell will reportedly earn $2.85MM with an additional $1.2MM worth of incentives built into the contract. The left-hander is a Legacy Sports Group client. 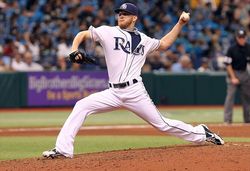 The Dodgers have not been shy about spending over the last eight months or so. They've re-signed Brandon League while adding Zack Greinke and Hyun-Jin Ryu this offseason, plus they acquired Adrian Gonzalez, Josh Beckett, Carl Crawford, and others during the season. Howell replaces the departed Randy Choate, who took a three-year deal with the Cardinals last month.

MLBTR's Tim Dierkes did not rank Howell as one of the offseason's Top 50 Free Agents. As our Free Agent Tracker shows, lefty relievers like Will Ohman, J.C. Romero, and Manny Parra remain unsigned.

Dylan Hernandez of the L.A. Times was the first to report that the two sides were nearing an agreement (on Twitter), and ESPN's Buster Olney reported that the agreement had been reached. Olney also added Howell's base salary (Twitter link), while Jon Heyman of CBS Sports tweeted news of the incentives.