MLBTR is launching a new series entitled "Transaction Retrospection" in which we'll take a look back on trades that have taken place to see how the players involved — including low-level minor leaguers — have fared in new settings and how the involved teams have been impacted. Remember that you can always look back at the players involved in transactions and check in on them yourself using MLBTR's Transaction Tracker.

Oftentimes, as spectators of the game, we focus on the immediate impact of trades rather than the long-term impact that some major transactions have on the teams involved. For example, while some undoubtedly remember all of the players involved in last year's Andrew Bailey–Josh Reddick trade between the Red Sox and Athletics, the majority of fans likely can't name all five players. The immediate impact was apparent in Reddick's success and Bailey's injuries, but there's more to this trade than just those two names. 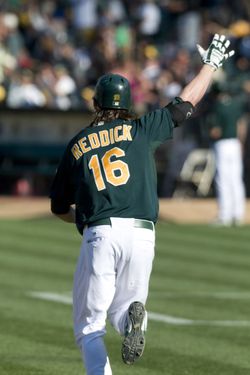 The Athletics traded Bailey and Ryan Sweeney to Boston in exchange for Reddick, Miles Head and Raul Alcantara. Reddick's breakout and Bailey's breakdown are well-known, but let's look at each player's individual progress to date:

The trade also had an impact on other players already in the organizations. Bailey's injury forced Alfredo Aceves into the closer's role in Boston for the first time, which had unspectacular results. The acquisition of Bailey was supposed to give the Red Sox enough depth to shift Daniel Bard into the starting rotation. Bard struggled, however, and when he returned to the bullpen after a Triple-A stint, he allowed 14 runs in six innings of relief pitching.

Reddick's acquisition, meanwhile, replaced the power production of the departing Josh Willingham — who signed as a free agent with the Twins — and vastly improved Oakland's outfield defense in the process. Willingham's departure, the Bailey trade and the Gio Gonzalez trade allowed the A's to invest four years and $36MM in Cuban hotshot Yoenis Cespedes.

The trade looks bleak for the Red Sox right now, but one of the beauties of transactions like this is the seemingly endless web they spin. For example, a strong season from Bailey could lead to another trade, causing the cycle to start all over again.