The Mets have agreed to sign free agent outfielder Rick Ankiel, according to ESPN New York's Adam Rubin (on Twitter). Ankiel, who is represented by the Boras Corporation, will receive a Major League contract, according to Jon Heyman of CBS Sports (Twitter link). 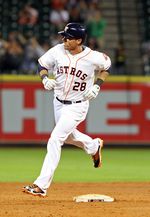 According to Rubin, Ankiel is in the Mets' starting lineup tonight and will play center field, while Andrew Brown has been optioned to Triple-A to clear a spot on the 25-man roster (Twitter links). Right-hander Jenrry Mejia has been transferred to the 60-day disabled list to clear a 40-man roster spot for Ankiel.

The 33-year-old Ankiel was released by the Astros last week — a move which Carlos Pena said "crushed" the team's clubhouse. The veteran pitcher-turned-outfielder was the personification of an "all or nothing" approach this season, as he hit just .194/.231/.484 with five homers and 35 strikeouts in just 65 plate appearances for Houston.

Heyman was also the first to report that the two sides were discussing a deal.