11:28am: Zambrano's contract contains a July 1 opt-out date, per Danny Knobler of CBS Sports (on Twitter).

10:14am: The Phillies have officially announced the signing of Carlos Zambrano to a minor league deal. He will report to extended Spring Training in Clearwater, Fla. Zambrano is represented by Praver/Shapiro, as shown in MLBTR's Agency Database. 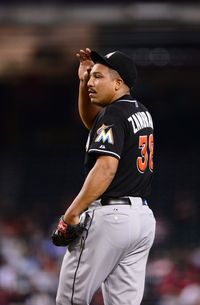 The 31-year-old Zambrano had previously agreed to a contract with the Long Island Ducks of the Atlantic League but never signed the contract as he continued to look for employment with a Major League team.

After spending parts of 11 seasons with the Cubs from 2001-11, Zambrano was traded to the Marlins (along with quite a bit of cash) for Chris Volstad. Notoriously hot-headed, Zambrano drew negative press in Chicago for fighting with teammates Michael Barrett and Derrek Lee. In his final years with the Cubs, he was suspended once by the league and once by the team for his antics. As a member of the Marlins, he posted a 4.49 ERA, 6.5 K/9, 5.1 BB/9, 0.61 HR/9, and 49.1% groundball rate in 132 1/3 innings (20 starts and 15 relief appearances).

Zambrano's name comes with quite a bit of baggage, but he's also a very accomplished Major League pitcher. "Big Z" owns a career 3.66 ERA, 7.5 K/9 and 4.1 BB/9 in 1,959 big league innings. He's made three All-Star teams, has three Top 5 Cy Young finishes and has a no-hitter under his belt as well. One of the best-hitting pitchers of the past decade, Zambrano also has three Silver Slugger Awards and a .238/.248/.388 batting line with 24 career homers.

Chris Cotillo of CLNS Radio first reported the news (on Twitter), which was soon confirmed by Ken Rosenthal of FOX Sports (also via Twitter).