The Rockies announced, via Twitter, that they have officially exercised their $11MM club option on Jorge De La Rosa for the 2014 season. 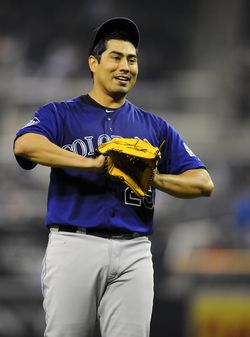 De La Rosa's strikeout rate is down quite a bit from its peak levels, but perhaps that's to be expected given his proximity to Tommy John surgery; his average fastball velocity checked in at 91.1 mph in 2013 — two full miles an hour slower than when he averaged 93.3 mph from 2009-10. In spite of his decrease in punchouts, it's hard to argue with his results. Fangraphs valued his contribution at 2.9 wins above replacement, while Baseball-Reference pegged him at 4.3 WAR.

De La Rosa's agent, Paul Cohen of TWC Sports, originally negotiated a two-year, $21.5MM contract that contained a $11MM player option for a third season. De La Rosa exercised that option after pitching just 10 2/3 innings last season while recovering from his surgery. In doing so, he triggered a clause that gave the Rockies a club option for a fourth year at the same $11MM rate.

De La Rosa figures to front a pitching staff that will also include right-hander Jhoulys Chacin and Tyler Chatwood based on their own success in 2013, but beyond that, there's little certainty in the Rockies' rotation. Pitching should once again be a major offseason priority for director of Major League operations Bill Geivett and GM Dan O'Dowd. Colorado's current internal options include Drew Pomeranz, Juan Nicasio and Chad Bettis. First-rounders Jonathan Gray, Eddie Butler and Tyler Anderson are all on the horizon as well, though each will require more time in the minors before being ready to join Colorado's rotation.