The Rays, Reds and Diamondbacks successfully completed a three-team trade today, the teams have announced. Tampa Bay acquired catcher Ryan Hanigan (and promptly extended him) from the Reds and Heath Bell (pictured) from the Diamondbacks. The Reds will receive left-handed pitching prospect David Holmberg from the Diamondbacks. Arizona, meanwhile, was able to shed Bell's salary and will receive minor league righty Justin Choate as well as a player to be named later or cash from the Rays. 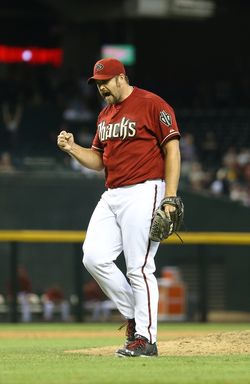 It was expected that Cincinnati would move Hanigan since they agreed to a two-year deal with Brayan Pena.  The 33-year-old had the worst season of his career in 2013, batting just .198/.306/.261 and tying a career-low with two home runs.

Hanigan will give the Rays three catchers with Jose Lobaton and Jose Molina already in the fold if Lobaton is not one of the outgoing players.  Molina is staying in Tampa Bay after agreeing to come back on a two-year, $4.5MM deal last month.

Hanigan has long been known as a patient hitter that is tough to strike out, as evidenced by a career 12 percent walk rate and 10.1 percent strikeout rate.  He also has a reputation as a solid defensive backstop, having led the league in caught-stealing percentage in 2013 (45 percent) and 2012 (48 percent).  He is also regarded as one of the best in the game at pitch-framing, a skill that he has in common with new teammate Molina.

Bell, 36, is owed $9MM this year in the final season of an ill-fated three-year pact he inked with the Marlins prior to the 2012 campaign. However, Miami is on the hook for $3.5MM of that figure, so the Rays have him for $5.5MM in 2014 while Arizona has him off the books. Bell rebounded from a dreadful 2012 campaign, to an extent, this past season. The veteran closer posted a 4.11 ERA with 9.9 K/9 and 2.2 BB/9. Bell saw improvements in his strikeout rate, walk rate and swinging-strike rate, giving the Rays hope that his so-so results were the product of unnatural BABIP and HR/FB marks.

Holmberg, 22, has spent most of the last two seasons at Double-A Mobile, where turned in a 2.75 ERA with 6.6 K/9 and 2.9 BB/9 in 26 starts this past season.  The lefty, who made his lone big league appearance on Aug. 27 vs. the Padres, was ranked as the No. 6 prospect in Arizona's system by Baseball America after the 2012 season.  Baseball America thinks highly of Holmberg's control and likes his chances of reaching his ceiling of becoming a No. 3 or 4 starter.

Choate, 22, posted a 2.88 ERA with 7.7 K/9 and 2.0 BB/9 in 40 2/3 in short-season Class-A this past year. It was the Stephen F. Austin State University product's first year of professional ball, as he signed with the Rays on a minor league deal out of independent baseball.

Ken Rosenthal and Jon Paul Morosi of FOX Sports first reported that Hanigan was going to the Reds in a three-team deal (Twitter link). John Fay of the Cincinnati Enquirer later tweeted that the Diamondbacks were the third team involved. The Arizona Republic's Nick Piecoro was the first to report the involvement of Bell and Holmberg (Twitter links). Rosenthal added that Holmberg would go to Cincinnati. Jack Magruder of FOX Sports Arizona reported that the Rays were the ones acquiring Bell (Twitter link). MLB.com's Steve Gilbert reported that Choate and a PTBNL or cash were headed to Arizona (on Twitter). Bob Nightengale of USA Today tweeted the financial details. Marc Topkin of the Tampa Bay Times tweeted that the PTBNL is not on Tampa's 40-man roster.