DEC. 12: Napoli will receive $16MM in each year of the deal and has a limited no-trade clause, according to Jon Heyman of CBS Sports (on Twitter).

DEC. 6: The Red Sox have agreed to terms with Mike Napoli, Rob Bradford of WEEI.com reports (Twitter link).  The contract is a two-year deal worth $32MM, according to CSNNE.com's Sean McAdam (via Twitter).  The slugger confirmed his return on his own Twitter feed, saying "The beard is coming back to Boston!!!"  Napoli is represented by Brian Grieper. 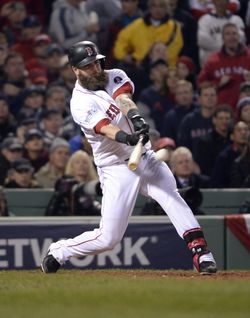 Napoli's contact falls short of the three-year, $42MM deal that MLBTR's Tim Dierkes predicted he would receive this winter, though obviously Napoli's clear desire to remain with the World Series champions impacted his decision.  Counting his $13MM salary from 2013 (in both base salary and incentives), Napoli will end up receiving $45MM between 2013-15 — well above the $39MM he was originally set to earn from Boston before he was diagnosed with avascular necrosis in both of his hips, which caused the Sox to pull their multiyear offer and extend just the one-year pact.

The 32-year-old silenced all questions about his health by hitting .259/.360/.482 with 23 homers in 578 PA for the Sox last season, also posting big numbers in the ALCS during Boston's championship run.  Napoli turned down a one-year, $14.1MM qualifying offer from the Red Sox earlier this winter and thus would've netted the club a compensation draft pick had he signed elsewhere, but now the club will have its starting first baseman back in the fold after already losing Jacoby Ellsbury and Jarrod Saltalamacchia in free agency this offseason.

Earlier today, FOX Sports' Ken Rosenthal reported that Napoli had received an offer from another club but his preference was to remain in Boston.  The Marlins, Rangers, and Mariners were all rumored to be interested in Napoli's services. Texas was believed to have made Napoli a larger offer, Bradford and Alex Speier report, though sources later told them that the Rangers never made a formal offer.  Napoli also turned down at least one three-year offer, according to Sportsnet.ca's Ben Nicholson-Smith, but Napoli preferred to remain with the Sox and accepted their smaller deal.