The Rockies made a series of moves this offseason, but seemingly lacked a cohesive strategy and may not be that much better this year than last. 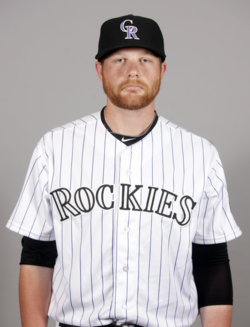 Though the 26-year-old may never be the kind of guy you simply assume will give you 200 quality innings, due to his injury history, this looks to be a good time to add him. With two years of control, Colorado gets to capture some upside if he succeeds. If he falters, or his body fails him, the 2015 option is also an out for the team to avoid wasting cash. And if Anderson resumes his former trajectory, Colorado will have exclusive negotiating rights and a reasonably valuable trade chip.
On the other hand, perhaps too little attention has been paid to the non-monetary return that went to the A's. Though Anderson has drawn strong reviews for his work over the spring, so too has the once-hyped Pomeranz. The key piece in the deal that sent Ubaldo Jimenez to the Indians, Pomeranz has actually logged less than 400 professional innings (more than a third of which have come at the MLB level) since becoming the fifth overall pick in the 2010 amateur draft. He struck out ten batters per nine in 91 minor league innings last year.
As Oakland GM Billy Beane put it: "He's only 25, and a lot of people still think very highly of his abilities, and we felt it was a good time to acquire him." Indeed, Pomeranz shows just one year and 50 days of MLB service on his odometer, meaning he'll play at league minimum until 2016 and remain under team control until 2019. At worst, Pomeranz's power from the left side has been much more effective against same-handed hitters, and he could add plenty of value from the pen.
Conclusion
So, did the series of whack-a-mole moves result in a net benefit to the Rockies, by cost savings, production, or both? We'll have to watch to find out, but I suspect not. Even if Fowler warrants a big raise next year (which would mean a strong season), it is hard to imagine he'll cost much more than $17MM over two years, and we know Outman took down a $1.25MM salary for 2014. Compare that with the $33.1MM that Colorado has now guaranteed to Stubbs, Morneau, and Logan, along with the roll of the dice on Lyles. (I'm assuming the team adds Anderson under either scenario.)
It is eminently arguable that the Rockies would have fielded a better team and saved some cash had they simply gone after a player like Nate McLouth, David Murphy, or Chris Young – or, for that matter, used an internal option like Corey Dickerson – and shifted Cuddyer to first. Alternatively, the club could have made a somewhat more substantial move at catcher, moving Rosario. Admittedly that market had pretty significant demand, but the 28-year-old, flyball-hitting Jarrod Saltalamacchia signed for just $4.5MM more than the Rockies promised Logan over the same term. Even if the team felt determined to move on from Fowler and add a first baseman, it might have received a better return on investment from someone other than Morneau. Michael Morse and Corey Hart both landed one-year deals at similar annual rates, and .
If the division-rival Diamondbacks' multiple swaps left some observers questioning that front office's imperatives of finding power bats and arms, some of the Rockies' moves left a trail of confusion. It is one thing to fault a team for its strategy or value assessment, and quite another not to be able to tell just what the team is hoping to accomplish.
We know that the club was willing to commit some serious cash to land McCann or Abreu, and those misses may have forced a mid-stream adaptation. But the results are hard to explain. If we credit the Rockies for taking a chance on spinning a solid player in Fowler for a post-hype, low-service-time arm in Lyles, then what do we make of the opposing move to deal Pomeranz to take on the short-term upside of Anderson? Perhaps those decisions were driven primarily by the team's scouting assessments, rather than broad roster structuring purposes; in that case, the front office will be judged by the outcome.
Of course, the Rockies still probably have enough talent to become a contender this year or next, if things break right. But it is arguable that the club could have had even more talent and even fewer salary commitments on its MLB roster. Owner Dick Monfort says that, with its business model, the team can reasonably aim to qualify for the post-season about "twice every five years." (One of every three clubs make it to the post-season, of course, in any given year.) But it has been four full seasons since that has happened, and the Rockies still seem like one of the least-likely post-season contenders in baseball.
If measured spending growth is to be the guiding principle, a more thoughtful allocation of limited resources may be needed to deliver on-field success. Given his statements and the team's actions, Monfort appears to have in mind to create a sort of competition/reload cycle, rather than being a boom-or-bust franchise. But the Rockies are in the fairly rare situation of having two in-prime stars under control at a reasonable price for the foreseeable future. Without decisive action in either direction (present or future production), the organization risks being trapped in a bubble of mediocrity.
newest oldest