The Rockies announced that they have traded outfielder Dexter Fowler and a player to be named later to the Astros in exchange for right-hander Jordan Lyles and outfielder Brandon Barnes. 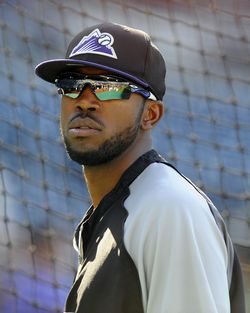 Fowler, 28 in March, wasn't able to replicate his brilliant offensive performance in 2012, but he still enjoyed a strong season. The switch-hitter batted .263/.369/.407 with 12 homers and 19 stolen bases as Colorado's primary center fielder. A sore right wrist and a left knee sprain limited Fowler to just 119 games, but he's only one year removed from a .300/.389/.474 batting line.

Fowler has a strong walk rate and rarely strikes out, but he's not without his warts. Fowler isn't regarded as a strong defensive center fielder, owning negative career marks in Ultimate Zone Rating and Derfensive Runs Saved. He's also done most of his damage at Coors Field, posting an .880 OPS at home in his career compared to a .694 mark on the road. He's owed $7.35MM in 2014 and will be arbitration eligible for the final time before free agency the following offseason.

Lyles, who recently turned 23, has a career 5.35 ERA with 6.2 K/9, 2.8 BB/9 and 48.6 percent ground-ball rate. Those numbers certainly aren't impressive, but Lyles has consistently been one of the youngest pitchers in the Majors after debuting as a 20-year-old in 2011. The Astros selected him 38th overall in the 2008 draft, and he twice ranked on Baseball America's list of Top 100 prospects. Lyles appeared to be on the road to a solid breakout season, having posted a 4.02 ERA through July 10, but he faded down the stretch, posting a 7.67 ERA over his final 13 appearances. Lyles won't be eligible for arbitration until next offseason and is under team control through the 2017 season.

Barnes, 27, batted .240/.289/.346 with eight homers and 11 stolen bases. Though he offered little at the plate, Barnes played outstanding defense in the outfield. He was solid against left-handed pitching as well, batting .296/.354/.437. He's under control through the 2018 season and is not yet arbitration eligible.