The Phillies brought in more veterans to supplement an already-aging core, and it is fair to wonder if the club is chasing good money after bad.

Notable Minor League Signings
Trades and Claims
Extensions
Notable Losses
Needs Addressed
Before addressing its roster, the Phillies set about formalizing what had already been expected: namely, that Hall of Famer Ryne Sandberg would take over as the skipper after serving as interim manager for the tail end of 2013. Guaranteeing Sandberg three years, the club made a clear commitment to his efforts to increase the hustle of a veteran-laden ballclub.
In off-the-field matters, the organization wrapped up a substantial new TV deal that figures to provide it $2.5B (and more) in revenue over the next 25 years. As I explained shortly thereafter, that deal should allow the club to maintain its place among the game's highest-revenue clubs, though it does not promise to advance the Phils beyond the other upper-echelon clubs.
Turning to the club's player assets, as I wrote back in October, Philadelphia GM Ruben Amaro Jr. faced a clear set of priorities, in the sense of roster areas where an MLB-ready player was needed. The club entered the offseason in the market for a corner outfielder, catcher, a couple of starters, and perhaps an arm for the bullpen.
Amaro tackled that list head on. He acted quickly to lock up a rejuvenated Byrd to play right field and to re-sign the longtime backstop Ruiz, plugging the two glaring holes in the everyday lineup. Having already decided to tender a contract to starter Kyle Kendrick, Amaro then rounded out the rotation by picking up a bounceback candidate in Hernandez and jumping on the opportunity to sign the aging-but-excellent Burnett. With several minor league signings to build out the team's bench options, the club wrapped up a straightforward offseason that — on its face — addressed most of the team's needs.
Questions Remaining
According to the thinking of Amaro, the big question facing this ballclub is simply the health of key players like Ryan Howard, Jimmy Rollins, and Chase Utley. "If the club we believe is going to break camp is able to stay on the field, we're a contending team," Amaro said. "My job is for us to try to be a contending team every year. Our payroll should allow us to do that. We had a couple of crappy years because we couldn't get guys on the field and couldn't get the performances we're accustomed to. Doc Halladay not being healthy crushed us. It's not his fault. It's just part of the game. When it happens to guys you are counting on with huge contracts, you can't just buy your way out with mediocre players."
But is that really the case? Those three have been relatively healthy over the spring, with each getting at least 46 plate appearances in Grapefruit League action. Other expensive, older players like Ruiz, Byrd, Cliff Lee, and Jonathan Papelbon have not suffered any injury issues, while costly setup man Mike Adams seems to be progressing well in his return from injury. 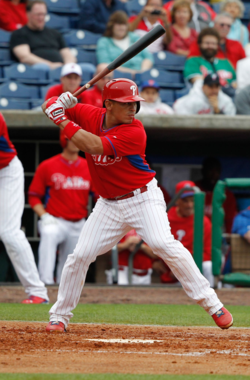