3:38pm: ESPN Chicago’s Jesse Rogers tweets that the Cubs are sending cash to Atlanta as well. It will be about $1MM going to Atlanta, tweets Wittenmyer.

3:24pm: The Braves have acquired left-hander James Russell and utilityman Emilio Bonifacio from the Cubs, according to Gordon Wittenmyer of the Chicago Sun-Times (on Twitter). 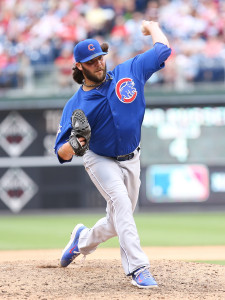 Russell, 28, has posted a 3.51 ERA with 7.0 K/9, 4.3 BB/9 and a career-best 40.9 percent ground-ball rate. While he’s picking up more grounders than ever, Russell has also shown the worst command of his career — a trend he will hope to correct with the Braves. Russell has typically handled left-handed hitters pretty well, but the opposite has been true in 2014; right-handed batters have a meager .364 OPS against Russell, while same-handed batters have an alarming .295/.358/.525 batting line against him. In his career, however, lefties have batted .240/.276/.416 against Russell. He is earning just $1.9MM in 2014 and is controlled through 2015.

The switch-hitting Bonifacio, 29, had a solid debut season for the Cubs before being included in the trade. He’s hitting .279/.318/.373 with a pair of homers and 14 steals (in 20 attempts). Defensive metrics have liked his work at second base, third base and in center field this season, though his career marks aren’t as strong.

Bonifacio had an interesting offseason, as he was tendered a contract by the Royals and agreed to a $3.5MM salary before being released (and subsequently paid only a portion of his still non-guaranteed deal). The speedster latched on with the Cubs in Spring Training and played well, though he’s spent a portion of the year on the disabled list.

As for Caratini, he was a second-round pick by the Braves in 2013 and ranked as the organization’s No. 7 prospect on MLB.com’s midseason top 20 list. The 20-year-old Caratini has batted .279/.352/.406 in 87 games at Class-A this season. He’s a switch-hitting catcher who also plays third base. Jim Callis and Jonathan Mayo at MLB.com feel that he’s a good enough defender to handle either position, but clearly he would have more value behind the dish. Though Callis and Mayo praise his defense, they feel that his bat is a better tool.