The Indians announced that they have traded left-hander Josh Outman to the Yankees in exchange for a player to be named later or cash considerations (Twitter link). 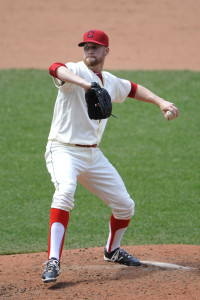 Outman, who had been pitching at Triple-A Columbus for the Indians, will report to the Yankees’ Major League roster. It’s unclear whether the Yankees claimed Outman off waivers or if they struck a deal with Cleveland after Outman had already cleared revocable waivers.

The 29-year-old Outman was acquired by the Indians this past offseason in a straight up swap for outfielder Drew Stubbs. While Stubbs has gone on to enjoy a strong season in Colorado, Outman saw his control decline with Cleveland, resulting in a demotion to the minor leagues. (The move did save the Indians $2.85MM, as Outman’s $1.25MM arbitration salary was significantly lower than the $4.1MM paid to Stubbs.) Though he posted a strong 3.28 ERA with 24 punchouts in 24 2/3 innings, Outman also walked 16 batters in that time, making for a career-worst 5.8 BB/9 rate.

What Outman has provided throughout his career is a strong option against left-handed batters. He held opposing lefties to a .180/.293/.380 batting line in 2014 and has limited them to a .188/.257/.287 triple-slash in 403 career plate appearances. Since his demotion, Outman had posted an inferior 4.41 ERA in 22 1/3 innings but had seen his command improve, walking just eight batters against 20 strikeouts in that time.

The Yankees are currently relying on David Huff and Rich Hill as the left-handed options in their bullpen, and Outman will provide manager Joe Girardi with another lefty to use if neither of those arms is removed from the roster in order to clear space. Outman is slated to finish the year with less than five years of Major League service time, meaning that the Yankees could control him through the 2016 campaign via arbitration if they wish.