The NL West blockbuster between the Dodgers and Padres is finally a reality and outfielder Matt Kemp is on his way to the Padres.  The two teams officially announced the five-player trade that will send Kemp and catcher Tim Federowicz to San Diego, with the Dodgers receiving catcher Yasmani Grandal, righty Joe Wieland, and pitching prospect Zach Eflin. The Dodgers will also include $32MM to help cover the $107MM remaining on Kemp’s contract, which runs through 2019. 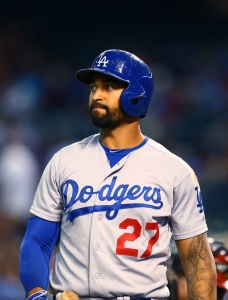 The two teams agreed to the trade over a week ago but, with so many moving parts involved, things naturally took a while to be finalized.  The Commissioner’s Office has to approve the deal given the large amount of money involved, the Dodgers’ other pending trade of Jimmy Rollins also played a role (as Elfin is widely-rumored to be flipped to the Phillies in that deal) and all of the players had to take physicals.

This last point might’ve been the main holdup, as Kemp’s physical revealed arthritis in both hips, according to USA Today’s Bob Nightengale.  The Padres asked the Dodgers to add more than $32MM in the deal but L.A. refused, FOX Sports’ Ken Rosenthal reported, and the trade went through as originally planned.

The deal gives the Padres a big bat and star power for their offense, which produced just 535 runs last year, a poor total even in the tough hitting environment in San Diego. The team lost out on Pablo Sandoval and Yasmany Tomas earlier this offseason, but Kemp, who hit .287/.346/.506 with the Dodgers in 2014, gives the Padres the dynamic offensive player they were hoping for. He’ll need to stay healthy, however — he missed significant time in 2012 and 2013 with a series of injuries, and he turned 30 in September. Kemp, who has struggled defensively in center field in recent years, could take one corner outfield spot for the Padres, with Seth Smith in the other. For the Dodgers, the deal clears salary and space in the outfield, where they also have Yasiel Puig, Joc Pederson, Carl Crawford, Andre Ethier and Scott Van Slyke.

Federowicz, 27, should help the Padres compensate for the loss of Grandal. He has five seasons of team control remaining and is coming off a strong year in a good hitting environment at Triple-A Albuquerque, where he batted .328/.383/.555 in 329 plate appearances. He struggled, however, in a small sample of 78 plate appearances at the big-league level. He’ll likely share the Padres’ catching duties with Rene Rivera, whose unexpectedly strong season in 2014 gave the Padres a bit of flexibility at catcher.

Grandal, 26, will join A.J. Ellis in manning the catching position with the Dodgers. He hit .225/.327/.401 for San Diego last season and got good marks for his pitch framing. The latter characteristic is surely attractive to Dodgers executive Andrew Friedman, who employed framing specialist Jose Molina in Tampa Bay and tried to sign another excellent framer, Russell Martin, for the Dodgers earlier this offseason. Grandal also hit 15 home runs in 2014, a solid total for a young catcher, especially in PETCO Park. He can become eligible for arbitration next offseason and eligible for free agency after 2018.

Wieland, 24, had Tommy John surgery in 2012 and took a long time to recover, but he finally made it back to the Majors in September 2014. He posted good numbers coming through the minors (mostly in the Rangers system), but doesn’t have outstanding stuff and probably profiles as a back-of-the-rotation starter.

The trade was just one of several major transactions for the Dodgers during a frenzied Winter Meetings.  Los Angeles also sent Dee Gordon and Dan Haren to Miami in a seven-player deal, acquired second baseman Howie Kendrick from the Angels, signed righty Brandon McCarthy to a four-year deal and agreed to acquire Rollins from the Phillies.