5:19pm: The Orioles have announced that they’ve actually designated Chris Parmelee, not Snider, to clear space for Parra. Parmelee, a lefty-hitting outfielder and first baseman, was hitting .216/.255/.433 in 102 plate appearances with the O’s. The Orioles signed him to a minor league deal last winter, and he hit well in 265 plate appearances for Triple-A Norfolk before being promoted in mid-June. Since then, his good power but low batting average and on-base percentage have been consistent with his performances over parts of four previous seasons with Minnesota.

2:07pm: The Orioles will designate outfielder Travis Snider for assignment, Dan Connolly of the Baltimore Sun tweets. He’ll lose his roster spot to make way for the just-acquired Gerardo Parra.

Snider, 27, had been hitting .239/.318/.344 in 233 plate appearances since arriving in a trade last winter. He was coming off a good season in a part-time role in Pittsburgh last season, but didn’t provide enough offense in Baltimore, particularly given that he’s purely a corner outfielder. The hot-hitting Parra, who also bats lefty, made Snider mostly superfluous. He’s making $2.1MM in his second season of arbitration eligibility, and the Orioles will be responsible for most or all of that amount unless he’s claimed.

The latest post-deadline news out of Queens..

Luis Severino’s next start will be in the majors, Yankees GM Brian Cashman told reporters, including Sweeny Murti of WFAN (on Twitter). Severino’s name came up in trade rumors in recent days – unsurprising given his upside – but the Bombers did not part with him.

While there were no true untouchables in the Yankees’ farm system this summer, Aaron Judge and Luis Severino came “close” to earning that label, George A. King III of the New York Post recently wrote.  Heading into the season, Baseball America ranked Severino as the No. 35 prospect in the country.  The right-hander got the bump up to Triple-A this season, pitching to a 1.91 ERA with 7.3 K/9 and 2.5 BB/9 in 11 starts.

The Mets have officially acquired outfielder Yoenis Cespedes from the Tigers, as Bruce Levine of 670thescore.com first reported on Twitter. In return, Detroit will get righties Michael Fulmer and Luis Cessa from New York, as Jon Heyman of CBSSports.com reported on Twitter. GM Sandy Alderson says the Mets will pay all of the approximately $3.75MM remaining on Cespedes’ 2015 salary, David Lennon of Newsday tweets. 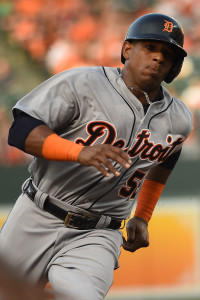 With the move, New York finally lands the power bat it was rumored to be pursuing for some time in the lead-up to the deadline. New York had already added reliever Tyler Clippard, third baseman Juan Uribe, and utilityman Kelly Johnson. After a widely-reported deal for Carlos Gomez fell through, the Mets turned their sights to alternatives and ultimately landed the 29-year-old slugger.

The Mets were said to be going after a controllable piece that was capable of playing center field, such as Gomez, but changed course in adding the free-agent-to-be Cespedes, who has spent most of his time in left. With Michael Cuddyer potentially out longer than had been hoped, Cespedes figures to take over there. But the club is also reportedly considering utilizing Curtis Granderson in center in some situations, as incumbent Juan Lagares has struggled since signing a significant extension before the season.

Cespedes is highly talented, if sometimes inconsistent, but he’s been outstanding in 2015. He’s hitting close to the levels he did in his breakout rookie campaign back in 2012, after two high-power/low-OBP seasons in between, with a .293/.323/.506 slash and 18 home runs through 427 plate appearances. Cespedes is delivering more hard contact, a better line-drive percentage, and more home runs per flyball than he has over any single full season. And Cespedes has increased his output on the defensive side of the ledger as well, drawing strong reviews from defensive metrics.

MLB.com now ranks Fulmer and Cessa the fifth- and ninth-best prospects, respectively, in an improved Tigers farm system. The 22-year-old Fulmer, the 44th overall pick in the 2011 draft, was in the midst of an impressive season at Double-A Binghamton, posting a 1.88 ERA, 8.7 K/9 and 2.4 BB/9 in 86 innings. MLB.com notes that his fastball is regularly in the mid-90s, and that he has a strong slider and a changeup good enough that he could one day be a Major League starter.

Cessa, meanwhile, is a 23-year-old converted infielder who performed well for Binghamton, with a 2.56 ERA, 7.1 K/9 and 2.0 BB/9 in 77 1/3 frames. He struggled after a promotion to hitter-happy Triple-A Las Vegas, but maintained his solid peripherals, striking out 24 batters and walking four despite allowing an unsightly 23 earned runs in 24 1/3 innings there. MLB.com notes that his fastball is generally around 93 MPH, and that he could wind up in the back end of a big-league rotation.

Cespedes now finds himself on his fourth team since last summer. He was dealt from the Athletics to the Red Sox, then to the Tigers over the winter, before landing in New York. It’s an unlikely series of transactions, all said.

The Padres and Indians have agreed to a minor swap that will send lefty reliever Marc Rzepczynski to San Diego for outfielder Abraham Almonte, tweets ESPN’s Keith Law.

Rzepczynski, better known as Scrabble, has pitched to a 4.43 ERA with 10.6 K/9 and 4.4 BB/9 this season.  For his career, the 29 year old (30 later this month) has posted a 3.81 ERA with 8.4 K/9 and 3.9 BB/9 across seven seasons.  Rzepczynski wasn’t mentioned much in trade speculation this month but the Padres apparently had their eye on him to bolster their bullpen.

The Pirates announced that they’ve acquired left-hander J.A. Happ from the Mariners in exchange for minor league righty Adrian Sampson. 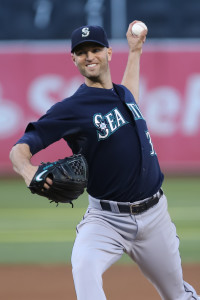 In picking up Happ, the Pirates have struck a last-minute deal to add a back-of-the-rotation starter to their ranks. The 32-year-old pitched to solid results for much of his first and only season with the Mariners, but he’s run into trouble as of late, posting an unsightly 8.47 ERA over his past four starts — a span of just 17 innings. At his best, Happ is a serviceable back-of-the-rotation arm whose greatest problem is a susceptibility to home runs versus right-handed hitters. PNC Park’s dimensions will help to mitigate that concern, as it’s ranked as one of the toughest parks in terms of right-handed home run factor in each of the past three full seasons.

On the year, Happ has a 4.64 ERA with 6.8 K/9, 2.7 BB/9 and a 42.1 percent ground-ball rate in 108 2/3 innings. Those numbers are more or less in line with the totals he delivered from 2012-14, although they came in the hitter-friendly Rogers Centre as opposed to the pitchers’ paradise that is Safeco Field. (His ERA+ from ’12-’14 was 89, compared to just 80 this season.) Happ is earning $6.7MM this season and is a free agent this winter, so he’ll be a short-term pick up that the Pirates can use as rotation insurance down the stretch.

The 23-year-old Sampson ranked as the Pirates’ No. 28 prospect on MLB.com’s midseason update, where Jim Callis and Jonathan Mayo praise the righty’s sinking fastball and ability to get grounders. The MLB.com duo notes that Sampson has strong command and average stuff across the board, giving him a low ceiling but also placing him close to big league ready. Sampson has started 21 games at Triple-A Indianapolis this season and has a 3.98 ERA with 6.9 K/9 and 2.1 BB/9 in 124 1/3 innings in that time.

The Rangers have acquired reliever Sam Dyson from the Marlins in exchange for catcher Tomas Telis and lefty Cody Ege, Clark Spencer of the Miami Herald tweets.

Dyson, 27, owns a 3.68 ERA with 8.4 K/9 and 3.5 BB/9 in 44 appearances this season.  Dyson also had a strong year in 2014, posting a 2.14 ERA with 7.1 K/9 and 3.2 BB/9 in 31 appearances.  The Blue Jays added Dyson to the 40-man roster in 2012 when he was called up to the Majors, but he appeared in just two big league games (both out of the bullpen) before being returned to the minor leagues. In the offseason, the club faced a roster crunch and the former fourth round draft pick was claimed off waivers by the Fish.  Dyson will now head to his third team, the Rangers.

The Cubs have acquired right-hander Tommy Hunter from the Orioles, tweets Ken Rosenthal of FOX Sports. ESPN’s Buster Olney adds that outfielder Junior Lake will go back to Baltimore in the deal.

Lake, 25, has struggled in the Majors with a .241/.283/.380 career line. He has played well at Triple-A this year, with a .315/.404/.472 line in 231 plate appearances. Prior to the 2013 season, back when Lake was still an infield prospect, Baseball America said he had “tantalizing tools and inconsistent performance.” If Lake does become a useful big leaguer, he’ll be a late bloomer. He’s the second outfielder the Orioles acquired today, as they made a bigger splash earlier by acquiring Gerardo Parra from the Brewers.