The Brewers announced that they’ve acquired shortstop Jonathan Villar from the Astros in exchange for minor league right-hander Cy Sneed. Villar will be reunited with former Astros assistant GM David Stearns, who is now the general manager in Milwaukee. 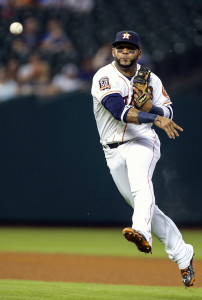 Villar, 24 (25 in May), provides the Brewers with some much-needed infield depth. Unlike fellow infielder Javier Betancourt, whom the club acquired in exchange for Francisco Rodriguez yesterday, Villar is capable of stepping directly onto the Brewers’ big league roster, however. Despite his young age, the switch-hitter has spent parts of three seasons in the Majors with the Astros and was even Houston’s Opening Day shortstop in 2014.

The Astros originally acquired Villar — along with Anthony Gose and J.A. Happ — from the Phillies in exchange for Roy Oswalt. Villar surfaced in the Majors in 2013 and batted .243/.321/.319 with a homer and 18 stolen bases in 58 games, which was enough to place him in the 2014 Opening Day lineup. He struggled that season, however, and his poor performance was likely a contributing factor in the Astros’ decision to sign Jed Lowrie to a three-year pact last winter.

In spite of the Lowrie addition, Villar still saw some playing time in 2015 and enjoyed better production, batting .284/.339/.414. Most notably, he dramatically cut his formerly problematic strikeout rate in his return to the Majors. While his 22.7 percent whiff rate was still higher than you’d like to see from a player with Villar’s lack of power, it was still a marked improvement from the 28.5 percent K-rate he displayed in 2013-14. He’s also shown reasonable plate discipline in the Majors, walking at an 8.1 percent clip in 658 total trips to the plate (7.8 percent in 2015). Villar’s greatest asset is his speed, as he’s swiped 34 or more bags in each season dating back to 2010 (in some cases, between the Majors and minors combined).

While not a gifted defender at shortstop (career -6 DRS, -19 UZR in 1344 innings), he could play some second base in Milwaukee next season or take the reins at shortstop in the event of a Jean Segura trade. Of course, with top shortstop prospect Orlando Arcia nearing the Major Leagues, Villar might not be long for that position one way or the other. He’s spent some time at second base, third base and in the outfield recently, so the Brewers may not the feel the need to commit to one single position for Villar at all, instead eyeing him as a fleet-footed super utility option. Villar is out of options, so he’ll almost certainly be on the Major League roster to begin the 2016 season. Milwaukee can control him through the 2020 season, as he currently has one year, 113 days of Major League service time.

The 23-year-old Sneed spent this past season, his age-22 campaign, pitching for the Brewers’ Class-A affiliates in the Midwest and Florida State Leagues. The 2014 third-rounder posted a combined 2.58 ERA with 7.9 K/9 against 1.8 BB/9 in 139 1/3 innings of work. MLB.com didn’t rank Sneed among Milwaukee’s Top 30 prospects, and J.J. Cooper of Baseball America tweets that Sneed is a “three-pitch right-haner who competes with fringe-average stuff.”