The Mariners have officially struck a deal to acquire outfielder Leonys Martin and righty Anthony Bass from the Rangers in exchange for right-handed reliever Tom Wilhelmsen, outfielder James Jones, and a player to be named later. 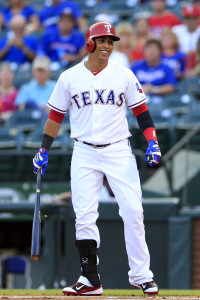 Martin had fallen out of favor in Texas after a rough 2015 season. The 27-year-old is an outstanding defender and major threat on the bases, but he slashed just .219/.264/.313 over 310 plate appearances. In the meantime, the Rangers found a Rule 5 gem in Delino DeShields Jr. While he and Martin made for a natural platoon pairing, there seemed to be some discord between Martin and the club after he was left off of the playoff roster and then refused to participate in Instructional League as a way to stay ready in case he was needed.

New Mariners GM Jerry Dipoto said that he sees Martin as a victim of bad luck — citing his .270 BABIP last year, which fell well below his .313 career mark — who ought to turn things around. (Via Ryan Divish of the Seattle Times, on Twitter.) It appears that Martin will go right to the top of the depth chart in Seattle, though Dipoto also told reporters tonight that another outfield addition could still be in the offing. It’s a good bet, though, that the team won’t now chase top free agents such as Dexter Fowler or Denard Span.

In addition to adding three years of control over Martin, Seattle will pick up three arb seasons of Bass. He represents a useful arm who will help maintain the Mariners’ bullpen depth. The 28-year-old comes with three years of arb control. He contributed only a 4.50 ERA last year, with 6.3 K/9 against 2.8 BB/9, but tossed 64 innings and drew more positive reviews from advanced metrics. While Wilhelmsen had represented a late-inning option, Dipoto had already gone out and added veteran set-up man Joaquin Benoit. But the club’s pen struggled last year, and adding Bass in this trade helps to guard against any scrambling for innings.

Texas, meanwhile, will add two seasons of Wilhelmsen, a 31-year-old righty who possesses a mid-90s heater. The veteran has thrown over 300 frames in the majors, working to a 2.97 overall ERA with 8.5 K/9 against 4.0 BB/9. He was right in that range in 2015, but continued a trend of posting earned run results that are much better than ERA estimators would expect. (For his career, Wilhelmsen has a 3.39 FIP, 3.94 xFIP, and 3.67 SIERA.)

Wilhelmsen figures to bolster a Rangers’ late-inning relief corps that has its share of questions. While pitchers like Shawn Tolleson, Keone Kela, Jake Diekman, and Sam Dyson all turned in quality seasons, there are enough question marks with that group that another good arm made sense.

And Jones is more than a throw-in, as he could ultimately be a cheaper and more controllable version of Martin. The left-handed hitter has not shown much of anything in his 400+ major league plate appearances, but has generally been rather productive at the plate in the high minors. Notably, last year, he not only put up a solid .294/.373/.423 batting line at Triple-A, but struck out only 68 times (against 53 walks) in his 501 trips to the plate — representing a huge improvement over prior seasons. While he may not possess an elite glove, Jones has swiped 28 bags in his limited MLB action. He could make for a useful pairing with DeShields up the middle.

While this deal shifts the assets between the clubs, it’s worth noting that it won’t have much impact on their respective payroll situations. MLBTR projects Martin to earn $3.75MM next year, matching his salary from 2015 — he would have only been projected at $1.6MM without that starting point — while Bass lands at $1.1MM. Meanwhile, the arb model pegs Wilhelmsen at an even $3MM.

Jeff Passan of Yahoo Sports reported the deal on Twitter. T.R. Sullivan first reported (on Twitter) the inclusion of Jones.