Ben Zobrist’s free agency has reached its long-awaited conclusion as the veteran elected to join an exciting, young Cubs roster. He’ll reportedly receive a four-year, $56MM contract that comes with full no-trade protection in the first three years and an eight-team no-trade list in year four. 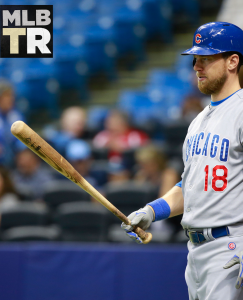 The addition of Zobrist creates a number of logjams on the Chicago roster, as his best positions — corner outfield and second base — are currently occupied by a combination of Kyle Schwarber, Jorge Soler, Javier Baez and Starlin Castro. Then again, the Cubs are said to be discussing a trade of Castro to the Yankees,* which would potentially free up second base and move Baez into a super-utility role (provided he isn’t traded himself).

Zobrist, 35 next May, is coming off a season in which he batted a combined .276/.359/.450 in 535 plate appearances between Oakland and Kansas City. The switch-hitter handled both right-handed pitchers and left-handed pitchers well and delivered arguably his best offensive season in the past three years despite splitting most of his time between the pitcher-friendly O.Co Coliseum and Kauffman Stadium.

Defensive metrics were down on Zobrist this season, though one has to wonder whether or not knee surgery that he underwent early in the year sapped his range and led to the uncharacteristically low ratings placed upon his glove by Defensive Runs Saved and Ultimate Zone Rating. Zobrist has typically graded out as a well-above-average defender in the outfield corners and at second base, and he also comes with big league experience at shortstop, third base and first base. That defensive versatility is one of the reasons that he was such a hot commodity on this winter’s free-agent market, with upwards of a dozen clubs connected to him at various times.

Zobrist was long tied to the Mets, Giants, Braves and Nationals, but the Cubs re-emerged as an apparent suitor in media reports earlier this afternoon. Zobrist’s priorities were said to be a winning team and a team that is relatively close to his Nashville home, and the Cubs check both of those boxes.

*Editor’s Note: A trade sending Castro to New York was reported later in the same evening.

Tommy Stokke of FanRag Sports tweeted that Zobrist would sign with the Cubs. Ken Rosenthal of FOX Sports tweeted the contract terms. Jon Heyman of CBS Sports and the New York Post’s Ken Davidoff reported details of the no-trade provision and annual breakdown.