The Mariners’ bullpen overhaul continued on Monday, as the team announced, via press release, that it has signed free-agent reliever Steve Cishek to a two-year deal. Cishek, who will serve as the club’s closer, is reportedly guaranteed $10MM over the two years — $4MM in 2016 and $6MM in 2017. He can also earn up to $3.5MM in each season for games finished. 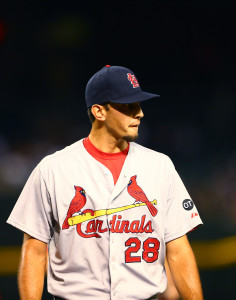 GM Jerry Dipoto teased the addition on 710 ESPN Seattle a night before the agreement was reported, saying he expected to make a bullpen addition before the end of the weekend. In today’s press release, Dipoto spoke highly of his new right-hander: “Steve gives us a proven bullpen presence with significant experience closing games. He’s a character guy who adds a new angle and fresh look to our pen.”

Cishek, 29, was non-tendered by the Cardinals earlier in the offseason. MLBTR projected a $7.1MM salary via the arbitration process. Of note, Cishek was arbitration eligible for two more seasons. The two-year contract will guarantee those seasons while granting the Mariners some protection if he doesn’t stick in the ninth inning.

The Cardinals acquired Cishek in late July for right-handed pitcher Kyle Barraclough. While his 2.31 ERA through 23 innings was encouraging, he lost control of the strike zone (5.01 BB/9). ERA estimators like SIERA (4.43) and xFIP (4.55) suggest he experienced some good fortune in St. Louis.

With the signing, Seattle is betting that Cishek can recover the form that made him one of the best closers in the league from 2013 through 2014. Over those two seasons, Cishek was among the 10 best relievers in baseball with 3.5 WAR and a 2.35 FIP.