From Derick Velazquez in January to Lance Lynn in November, there were 112 ulnar collateral ligament (UCL) injuries requiring reconstructive surgery — commonly called Tommy John Surgery (TJS) — in the 2015 season. Once a career-killer, UCL injuries have become a much more survivable injury over the last 30 years. And while more and more players are successfully returning from TJS, the procedure itself is a catastrophic event and requires a minimum of a year to recover.

That makes predicting UCL injuries a valuable and worthy endeavor. From the GM to the fantasy owner, being able to steer away from players with early warnings signs of UCL injuries can save a team’s season. The red flags for UCL injuries are not big, though, and many UCL injuries appear from nowhere. But using a large data set, culled from a variety of valuable resources, we can find the tiny red flags, the little baby red flags.

For the past seven months, I have been working with Tim Dierkes and his staff to develop a model to predict Tommy John surgery. The creation of this model required, quite literally, hundreds of thousands of lines of data and hundreds of man hours to combine and connect and test data from a variety of disparate sources. The project also took, as a sacrifice, one of my computer’s CPUs, which burned out shortly after completing some herculean computations. Fare thee well, i7.

[For further details on the process, results, and limitations of this study, please refer to Bradley’s MLBTR Podcast appearance and MLBTR Live Chat.]

The following is an attempt to quantify the risks that foreshadow potential UCL injuries. It is a combination of FanGraphs player data, Jeff Zimmerman’s DL data, PITCHf/x data, a bunch of hard work, and the keystone data: Jon Roegele’s TJS data, as stored on Zimmerman’s Heat Maps. We also checked our numbers against Baseballic.com, which houses arguably the most comprehensive injury data online.

And while most efforts at quantifying TJS risk have focused on recent appearances or recent pitches, our research takes a step further back and examines injury risks on an annual basis. It seeks to consider the problem from the GM’s view, and not the game manager’s.

The following names are sorted by greatest risk to least. For more details about the columns and the model that has created this data, continue reading after the embedded data. 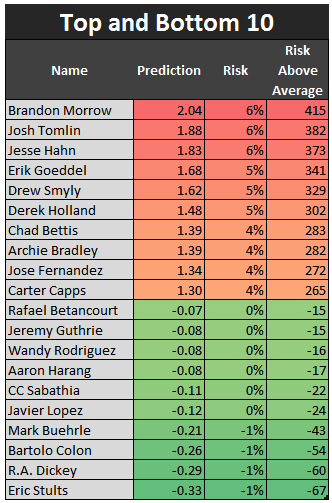 The results include three terms that help define where the players fit:

The Raw Numbers section includes the specific variables involved (explained in further detail in the “The Inputs” section). The Indexed Section includes the same data, but indexed (unless it is binary). That means the average is 100, twice the average is 200, and so on. This is the same as wRC+ or OPS+ or even Risk+, minus the % sign and with league average at 100 instead of 0%.

Over the preceding months, I have tested, prodded, and massaged many numbers. These were the factors that ultimately proved to have the strongest, most consistent relationships with impending TJS:

Here is a breakdown of the variable and coefficients involved:

It is important to remember that the coefficients here do not visibly represent the strength of each variable because they each use a different scales. For instance, the largest Previous TJS is 2, but the largest Hard Pitches number is 2,488. (That said, Previous TJS is a much more predictive variable.)

P-values, in short, are the probabilities that the given variable is actually meaningless. Traditionalist might bristle at some of the P-values involved there. I personally find the customary cut-off P-values of .10, .05, or .01 artificial and unnecessarily limiting. Others are welcome to disagree.

Why is Player X So High/Low?

So your favorite pitcher is Brandon Morrow, and you’re distressed to see him top the charts here. Let’s look at why:

I am pleased to see the likes of R.A. Dickey, Mark Buehrle, and Bartolo Colon at the bottom of the list. They are older pitchers with incredibly steady release points and no recent injury history (Dickey, of course, doesn’t have a UCL in the first place, though obviously the statistical algorithm in question doesn’t take such factors into consideration. We left his name in the results regardless of that fact, for those wondering why, as a means of illustrating the type of pitcher likely to rank low on the list). Of course, these guys, at their age, are perhaps even more likely to be ineffective and retire mid-season than they are to suffer a catastrophic injury, but that is neither here nor there.

Free agent Tim Lincecum also makes the list, and in a very positive way with a risk that is 51% below the league average. While any GM or fantasy owner looking into a Lincecum 2016 season will no doubt be aware of his injury history, it is a great sign for the two-time Cy Young winner hoping to move forward in his likely-post-Giants career. The strongest contributing factors to Lincecum’s risk, however, are his inconsistent release point and the fact he makes a living off mixing up four generally slower pitches. While he has not shown great effectiveness in the past four seasons, avoiding TJS could buy him enough time to find a rhythm with his greatly decreased velocity.

Young Marlins ace Jose Fernandez only missed 35 days due to a biceps issue — if we don’t count the 97 days he missed recovering from TJS in 2015 — but that previous elbow operation combined with his young age suggests he is at greater risk of a second TJS heading into 2016. Again, we need a caveat here to remind us that age, while a predictor of TJS, may not be a good predictor of UCL tears.

There are a few variables not included that might seem intuitive or necessary to include, but ultimately did not make the cut:

Without comprehensive dumps from the PITCHf/x data at Brooks Baseball or the Baseballic.com injury database, and without good information on late-career UCL injuries that result in retirement instead of TJS, and without medical records from these players themselves, we will always be playing catch-up with our prediction models. If I am a team considering one of the players listed above, I would defer to medical and pitching experts opinions following a thorough medical examination.

But from our perspective, from the data available in the public sphere, these are the best, strongest tiny red flags I could find. And I hope and expect they will push this field forward. If you’d like to discuss my Tommy John research further, check back at MLBTR at 7:30pm central time, as I’ll be doing a live chat.

A special thanks to Jon Proulx who helped do some very boring data work with me!