Here at MLBTR, we’re revamping our weekly look back to include key news and rumors rather than focusing purely on transactions, as we did in our prior Week In Review feature. Here’s a glance at five narratives that were most crucial to our coverage since last Saturday.

Marlins, Dodgers strike deals for pitchers. Two contenders attempted to upgrade their pitching staffs via the trade market this week, as the Marlins traded pitching prospect Chris Paddack for Padres closer Fernando Rodney, and the Dodgers acquired Bud Norris from the Braves in a five-player deal. As for the reasons the Dodgers felt the need to acquire Norris, read on … 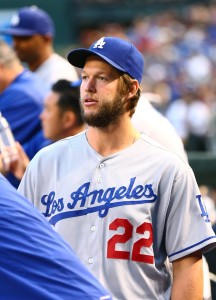 Pitcher injuries everywhere. This was a tough week to be a pitcher. The Dodgers placed ace Clayton Kershaw on the DL with “mild disc herniation” in his back. Kershaw won’t require surgery, but the loss of a player in the midst of an historic season is a significant blow to the Dodgers, particularly given all the other pitching injuries with which they dealt. Kershaw wasn’t the only pitcher about whom injury news was reported this week — Andrew Heaney of the Angels needs Tommy John surgery, the Twins’ Phil Hughes will miss the rest of the season after having shoulder surgery, Phillies prospect Mark Appel is out for the season after having surgery to remove a bone spur, Mets starters Noah Syndergaard and Steven Matz are pitching with bone spurs themselves, and Athletics reliever Sean Doolittle hit the DL with a shoulder strain. Meanwhile, the Nationals’ Stephen Strasburg landed on the DL with an upper back strain, leading to the promotion of top prospect Lucas Giolito.

Matt Moore rumors build. Rays starter Matt Moore still hasn’t returned to his 2012-2013 form after having Tommy John surgery in 2014, but he’s attracting trade interest, with the Rangers one of several interested clubs. The Rays could be motivated to deal Moore in part because they could soon have a starting pitching surplus.

Braves, Padres, Athletics, Nationals land big July 2 hauls. The international signing season opened today, and, as has increasingly been the case in the past few years, most of the top talent went to just a few teams. The Braves got not only Kevin Maitan, widely regarded as the top overall prospects, but several other well-regarded prospects as well. The Padres landed six prospects who received bonuses of at least $1M. The A’s got Cuban outfielder Lazaro Armenteros and several other top players, while the Nationals paid a combined $5.2MM to land infielders Yasel Antuna and Luis Garcia. The Reds and Cardinals also made splashes. The Red Sox, meanwhile, were banned from spending on international bonus pool-eligible players this year and had several contracts voided as penalty for the use of a “package deal” mainly designed to ink outfielder Albert Guaimaro last July.