Right-hander Santiago Casilla has spent his entire career calling the Bay Area home, and that trend will continue in 2017, as he’s signed a two-year deal with the Athletics, the team announced on Friday. Casilla will reportedly be guaranteed a total of $11MM and can earn up to $3MM ($1.5MM each season) worth of incentives based on the number of games he finishes. 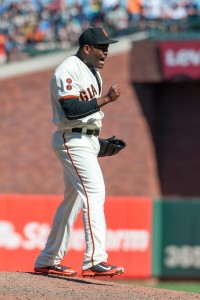 Casilla spent parts of four seasons serving as the closer in San Francisco, and he’ll add another intriguing arm to a crowded ninth-inning scene in Oakland. Left-hander Sean Doolittle and right-hander Ryan Madson each has recent experience closing out games for manager Bob Melvin, while righty John Axford is just a season removed from picking up 25 saves for the Rockies. Right-hander Ryan Dull also enjoyed a dominant rookie campaign, posting a 2.42 ERA with 8.8 K/9, 1.8 BB/9 and a 33.2 percent ground-ball rate in 74 1/3 innings across 70 relief appearances. Casilla now joins that mix and gives Melvin another late-inning option with a strong track record.

In his seven seasons with the Giants, Casilla has logged a pristine 2.42 ERA with 8.3 K/9, 3.5 BB/9 and a 51.7 percent ground-ball rate. He’s saved 123 games for the Giants in that time and, of course, been a part of three World Series victories as well. The 2016 season, though, represented somewhat of a struggle. While he finished the year with a respectable 3.57 ERA, Casilla also suffered nine blown saves and ultimately lost his grip on the closer’s role in San Francisco. Casilla has seen his ground-ball rate decline over the past two years, and perhaps unsurprisingly his home-run rate has spiked as well.

The 2016 season came with plenty of positives as well, however, as Casilla’s 10.1 K/9 rate was the best of his career, and his 93.6 mph average fastball perfectly matched his average velocity from the 2011 campaign — his age-30 season. Casilla’s 2.95 BB/9 rate was also the second-best mark of his career. If Casilla can rein in the home runs to which he’s suddenly become susceptible, his mid-3.00s ERA could trend more closely to its previous levels, as the majority of his secondary stats remain strong.

Of course, the addition of another late-inning arm to the Oakland relief corps could also allow president of baseball operations Billy Beane, GM David Forst and the rest of the Athletics’ front office explore the possibility of trading from its bullpen to address other areas of need on the roster (or simply to bolster the team’s farm system).

It’s been a busy week for the Oakland front office, as Casilla represents the third free agent signed by the A’s in that stretch. Oakland has also picked up veteran outfielder Rajai Davis (another former Athletic) and infielder Trevor Plouffe on a pair of one-year deals in recent days.

Robert Murray of FanRag Sports first reported that the two sides were closing in on a two-year deal (on Twitter). Susan Slusser of the San Francisco Chronicle reported that an agreement was in place (Twitter link). MLB.com’s Jesse Sanchez reported the financial terms (on Twitter), and Slusser tweeted further details on the incentives.