Giancarlo Stanton was a star before 2017, but he elevated his profile even further with a huge campaign. As was just announced, the burly slugger is among the three finalists for the National League’s Most Valuable Player Award after a season in which he fell just shy of the 60 home run threshold. 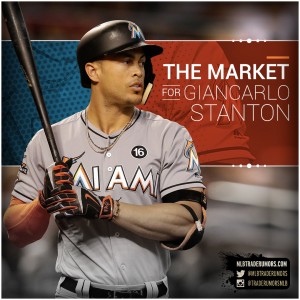 Stanton, clearly, is among the game’s best hitters. Unlike some other top sluggers, he’s also a quality fielder, making him a legitimate organizational centerpiece. He also just marked his 28th birthday. That relative youth is particularly important given his checkered injury history. Stanton’s 159 games played in 2017 not only sets a personal high, but represents only the third season in which he has appeared in more than 123 contests. While the looming Stanton is a paragon of fitness, and does not have a specific health issue of particular concern, he’s also a very large man who could face some challenges as he ages.

If Stanton was a free agent, he’d unquestionably be the top player available. How much might he get? That’s debatable, but $295MM — the amount left on his contract — isn’t a terrible guess. Opt-outs are de rigueur these days, so Stanton’s post-2020 opportunity would be a reasonable addition, as would be no-trade protection.

Instead of a free-agent bidding war, though, we’ll be treated to one of the trade variety — assuming the Marlins follow through on their intentions to deal Stanton — that’ll hinge upon myriad questions. How much will the opt-out function as a deterrent? What about the availability of other quality power bats this year (J.D. Martinez) and next (Bryce Harper, et al.) in free agency? Is there surplus value in the contract? Can the Marlins get a team to give something significant up for the right to pay Stanton at roughly his market rate?

The answers to those queries will ultimately flow from the demand side. Stanton’s own preferences, of course, represent a critical — and largely unknown — factor. He’ll have to be involved given his veto power. Stanton is from the west coast, though the strength of the geographic pull isn’t entirely clear. All that’s really clear at this point is that he has a strong desire to avoid a rebuilding situation. Let’s take a look, then, at which rival organizations might show interest, and how strong that interest might be: