The Athletics are in agreement with free-agent right-hander Yusmeiro Petit on a two-year, $10MM contract with a third-year club option, Ken Rosenthal of The Athletic reports (via Twitter). Petit is represented by Godoy Sports. He’ll earn $3.5MM in 2018, $5.5MM in 2019 and has a 2020 club option for another $5.5MM that comes with a $1MM buyout, I’m told. The deal is pending a physical. 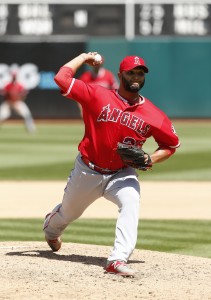 The 33-year-old Petit is fresh off a career year in which he led big league relievers with 87 1/3 innings and also tossed four innings in a spot start. Overall, he pitched to a 2.76 ERA with 10.0 K/9, 1.8 BB/9 and a 32.9 percent ground-ball rate in his 91 1/3 frames with the Halos. Of Petit’s 59 relief appearances, 33 lasted more than an inning, and he was often asked to work two or even three innings at a time. By season’s end, he’d graduated from lower-leverage spots to high-leverage setup appearances and even a few closing opportunities, as he saved four games for the Halos.

While he didn’t establish himself as a regular big league contributor until his age-28 season (2013< Petit has somewhat quietly been a solid ’pen option for the Giants, Nats and Angels dating back to 2012. In that time, he’s worked to a 3.59 ERA and a 3.40 FIP over the life of 399 big league innings, brushing up against history a few times along the way. He came within a single out of a perfect game for the Giants in September 2013 and went on to set a Major League record for most consecutive batters retired the following season in 2014.

Despite the flashes of greatness, Petit has also struggled at times due to a susceptibility to home runs. The long ball was an issue for Petit early in his career with the Marlins and D-backs, and he saw some flare-ups in that regard in his final season with the Giants (1.3 HR/9) and especially in his lone season with the Nationals (1.74 HR/9). Whether he can continue to average better than a strikeout per inning remains to be seen as well; he averaged 10.2 K/9 in a very strong ’14 season with the Giants but sat around 7.0 K/9 from 2015-16 with the Giants and Nats. Petit doesn’t throw hard, sitting 89-90 mph with his fastball, though Fangraphs’ Eno Sarris wrote back in 2014 about the difficulty opposing hitters face in tracking Petit’s pitches due to deception in his delivery.

Petit will add some length to a bullpen that figures to be anchored by Blake Treinen, who shined in Oakland after being acquired from the Nationals in the trade that sent Sean Doolittle and Ryan Madson to Washington. Manager Bob Melvin’s bullpen figures to also feature right-handers Santiago Casilla, Ryan Dull, Emilio Pagan and Chris Hatcher (assuming Hatcher is tendered a contract). His experience working in longer stints could also give Melvin and the A’s some flexibility to utilize him as an occasional spot starter should the need arise, though it seems likely that he’ll be relied upon as a bullpen arm rather than a candidate for the fifth spot in the rotation.

The A’s — like every other club given the painfully slow pace of the 2017-18 offseason — still have work to do between now and Opening Day, of course. They’re reportedly on the hunt for a controllable right-handed-hitting corner outfielder now that the trade of Ryon Healy (to the Mariners in exchange for the aforementioned Pagan) has paved the way for Khris Davis to serve as their DH. They also need to bring in a center fielder and could look to add some left-handed bullpen options as well as an upgrade at catcher. However, with Petit and Pagan now on board, plus the midseason pickups of Treinen and Hatcher, Oakland doesn’t seem likely to consider additional right-handed relief a top priority.