DECEMBER 20: Nicasio’s signing has been announced.

4:19pm: The Mariners have agreed to a two-year contract with free agent reliever Juan Nicasio, pending a physical, per Ken Rosenthal of The Athletic (Twitter link). Nicasio, a client of Reynolds Sports Management, is the latest reliever to come off the board during the Winter Meetings, where a robust market has developed for bullpen pieces. 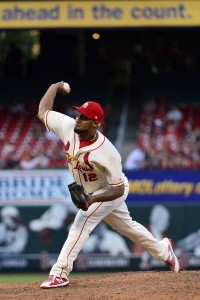 The 31-year-old Nicasio, a former starter, drew interest from several teams on the heels of his best full season as a reliever, in which he spent time with the Pirates, Phillies and Cardinals. The right-hander combined for 72 1/3 innings across a National League-high 76 appearances with those clubs and recorded a 2.61 ERA, adding 8.96 K/9 against 2.49 BB/9 and a 45.6 percent groundball rate. Dating back to 2014, the first season in which he began garnering experience as a reliever, Nicasio has tossed 205 frames of 3.38 ERA ball while registering 9.99 K/9 and 3.42 BB/9.

The production Nicasio has offered during his time as a reliever would be a boon to a Mariners bullpen that finished with middle-of-the-pack rankings in ERA (13th) and fWAR (16th) in 2017. The M’s have since lost one of their top relievers from last year in Emilio Pagan, whom they traded to the Athletics for first baseman Ryon Healy last month. But other than Nicasio, there are still several appealing late-game options on hand in a group that includes fellow righties Edwin Diaz, Nick Vincent, David Phelps and Tony Zych and southpaws Marc Rzepczynski and James Pazos.