The Twins have continued their aggressive, late foray into the free-agent market, announcing on Monday that they’ve signed right-hander Lance Lynn to a one-year contract. He’ll earn $12MM, per the team, confirming previous reports on his salary. The deal reportedly allows Lynn to earn another $2MM worth of incentives — half each upon reaching 170 and 180 innings. Lynn, a client of Excel Sports Management, will get right going with the Twins and start their Grapefruit League Game against the Orioles tomorrow, per the team’s announcement. 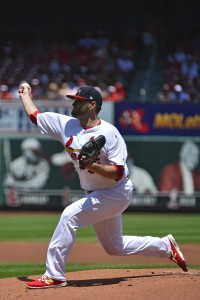 The pact makes Lynn the latest victim of a slow-moving offseason in which a number of high-profile players have been forced to settle for one-year deals that look diminutive in comparison to those they were expected to receive. At the outset of the offseason, we ranked Lynn ninth on our list of the top 50 free agents, predicting that he’d receive $56MM over four years. More recently, our player profile for the righty suggested he could even achieve a $60MM deal. Obviously, the (relatively) meager $12MM guarantee from the Twins falls significantly short of those expectations. He’ll instead join Mike Moustakas, Logan Morrison, Jonathan Lucroy and Carlos Gonzalez as players who were widely expected to merit hefty multi-year pacts but will ultimately be guaranteed less money than reliever Juan Nicasio.

As for the Twins, the deal comes as the latest move of an incredibly busy (and cost-efficient) offseason during which the club has managed to patch its rotation quite nicely. After missing out on Yu Darvish, to whom the club reportedly offered a nine-figure contract that would’ve shattered the club record, the Twins traded a low-profile prospect for Jake Odorizzi and have now gotten an incredible bargain on Lynn. Minnesota also managed to bring Morrison to Minnesota on just a $6.5MM deal with incentives and a vesting option. Though Lynn and Morrison were widely expected to command in the vicinity of $100MM in combined guarantees, the Twins will promise them a total of just $18.5MM. The club has also shored up their bullpen this winter by signing Addison Reed, Zach Duke and Fernando Rodney.

Lynn will join Odorizzi as a newcomer in the rotation, which will also eventually feature three holdovers in the form of Ervin Santana, Jose Berrios and Kyle Gibson. Santana, however, will be out for as much as the first month of the season after undergoing surgery in February to repair an injury in his right middle finger. The increased number of off-days early in the season could cause the Twins to largely get by without a fifth starter in that time, though lefty Adalberto Mejia and veteran Phil Hughes (returning from his second thoracic outlet surgery) are among the on-hand options should a fifth starter be needed. The addition of Lynn likely pushes Tyler Duffey back to the bullpen and further lessens the organization’s need to rush top prospects Fernando Romero and Stephen Gonsalves to the Majors.

The 30-year-old rejected a qualifying offer from the Cardinals at the outset of the offseason, so the Twins will be forced to forfeit a 2018 draft pick after signing him. But because the Twins were revenue-sharing recipients in 2017 and didn’t exceed the luxury tax threshold, that pick will be just their fourth-highest of the draft (number 95 overall). They’d normally be required to surrender their third-highest pick, but for Minnesota that’s a protected selection in Competitive Round B. For Lynn’s part, he’ll no longer be eligible to receive a qualifying offer next year thanks to a provision in the new CBA.

Lynn’s spent his entire career thus far with the Cardinals, who selected him with a supplemental first round pick in 2008. He reached the majors for the first time in 2011, and pitched his first full season in the majors the following year. From that point, he chucked 752 2/3 innings for the Redbirds (to the tune of a 3.39 ERA) across four seasons before tearing his UCL and undergoing Tommy John surgery in November of 2015. After returning to the mound to kick off the 2017 campaign, the righty made 33 starts and posted a 3.43 ERA.

Although it seems on the surface that he picked up right where he left off, pre- and post-Tommy John surgery Lynn don’t look like the exact same pitcher. While he boasted a career K/9 of 8.67 prior to going under the knife, his 2017 mark was a meager 7.39. Likewise, his 4.75 xFIP last season was almost exactly a full run higher than the 3.74 figure he owned prior to 2016. His control wasn’t quite as good either, as evidenced by a 3.77 BB/9 mark in 2017. His pre-Tommy John mark was just 3.35. These statistical red flags, along with a 0.6 MPH drop on his average fastball, may have been part of the reason teams were wary of giving him a long-term pact. Still, he’s at least got durability going for him; outside of 2016 he’s thrown at least 175 innings in each of his full major league seasons.

The Lynn deal seems to spell bad news for fellow right-hander Alex Cobb who remains on the free agent market. It’s tough to imagine that Cobb, who’s also one season removed from Tommy John surgery and owns similar career run-prevention numbers, will be able to substantially eclipse Lynn’s guarantee. With just under three weeks until Opening Day, it’ll be interesting to see what type of contract the top remaining free-agent starter can secure, especially in relation to his most statistically comparable open-market competitor.

FanRag’s Jon Heyman reported the two sides were close to a deal (via Twitter). MLB.com’s Jon Morosi reported the agreement and the terms (Twitter links). Mike Berardino of the St. Paul Pioneer-Press tweeted details of the incentives.