The Blue Jays have officially struck a deal that will send veteran outfielder Curtis Granderson to the Brewers. Outfield prospect Demi Orimoloye will go to the Jays, who will cover some of the remainder of Granderson’s $5MM salary. 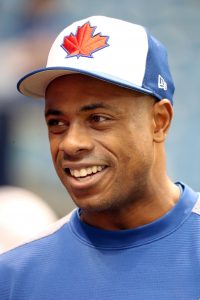 Granderson, who had cleared trade waivers earlier this month, becomes the third player acquired by the Milwaukee organization today, joining left-handed pitchers Gio Gonzalez and Xavier Cedeno. Multiple 40-man roster moves will still be required to accommodate the two most recent additions, who’ll help the club hold onto Wild Card position and try to chase down the division-leading Cubs.

Adding the 37-year-old Granderson will give the Brewers another bench bat to work with. He has been used almost exclusively against right-handed pitching this year, and for good reason. In 322 plate appearances with the platoon advantage, he’s slashing .250/.345/.443 with 11 home runs. In limited action against lefties, Granderson carries only a .518 OPS.

The Brewers will surely continue to put Granderson in the game only in advantageous situations. With fellow slugger Eric Thames also available, the club now has a pair of lefty power bats to spell outfielder Ryan Braun and first baseman Jesus Aguilar and/or to utilize in pinch-hitting situations.

Granderson, who also traded last August, featured at the #2 spot on our most recent list of the top 20 August trade candidates. That assessment was based upon his above-noted niche as well as his oft-lauded clubhouse presence, which made Granderson an obvious target for teams in need of infusing a lefty bat and some veteran gravitas.

The 21-year-old Orimoloye, a native of Nigeria who was drafted out of Canada, was selected by the Brewers in the fourth round of the 2015 draft. He earned his way to the High-A level after a solid run to open the year at Class A, but has struggled since. In 277 plate appearances with the Carolina Mudcats this season, he owns a .236/.303/.368 slash with seven home runs and seven steals in a dozen attempts.