The Braves have acquired catcher Rene Rivera from the Angels, per an announcement from the Los Angeles organization (h/t Jon Morosi of MLB.com, via Twitter). The Halos allowed Rivera to depart via a straight waiver claim. 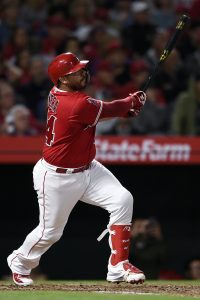 With the move, the Atlanta organization will take over Rivera’s contract. Just under $500K remains on his $2.8MM salary for the year. The veteran receiver will be a free agent at season’s end.

Rivera, 35, is best known for his excellent work behind the dish. He has typically graded as an excellent framer, though he has been more in range of average over the past two seasons. Rivera has also traditionally been quite effective at limiting the running game.

While he missed a big chunk of time this year due to injury, limiting him to 30 games of action on the season, Rivera has also been reasonably productive with the bat. He carries a .244/.287/.439 slash with four home runs over 87 plate appearances, though he has drawn only four walks to go with 32 strikeouts.

In Kurt Suzuki and the just-extended Tyler Flowers, the Braves already have two catchers who have combined to form a strong overall duo. The organization did just drop veteran depth receiver Chris Stewart from its 40-man roster, so perhaps it sees this as an opportunity to ensure there’s a reliable player in place in the event of injury. He’ll also help spread the burden down the stretch for a club that now has the inside track to winning the NL East.