Even though he still has another year of team control remaining, superstar first baseman Paul Goldschmidt – a Diamondback since they chose him in the eighth round of the 2009 draft – may be in his final days with the club. While the path the Diamondbacks will take during the offseason is uncertain, general manager Mike Hazen hasn’t ruled out a full rebuild. Arizona’s in a bind in terms of payroll, as MLBTR’s Steve Adams explained earlier this week, and set to lose two of its best players to free agency in left-hander Patrick Corbin and center fielder A.J. Pollock. 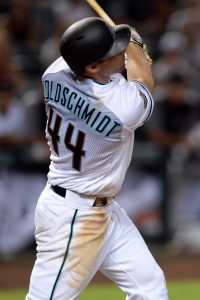 In the event those factors do lead to a teardown in the desert, the logical move may be to at least gauge interest in the 31-year-old Goldschmidt. USA Today’s Bob Nightengale reported earlier this week Arizona will indeed “listen on” Goldschmidt, as dealing him would help restock a barren farm system which Baseball America (subscription required) ranks as the game’s fourth worst.

Between the free-agent and trade markets, Goldschmidt would easily be the premier first base option available. As MLBTR’s Jeff Todd wrote Wednesday, there don’t seem to be any starting-caliber first basemen set to reach free agency, while all of Goldschmidt’s fellow trade candidates at the position pale in comparison to the six-time All-Star. Those factors – not to mention Goldschmdt’s affordable salary (he’ll play 2019 on a $14.5MM club option) – would likely lead to widespread interest.

2019 will be the final season of the six-year, $46.5MM extension (including the option) he inked with the D-backs entering 2013. The decision to lock up Goldschmidt before he turned into an elite player will go down as one of the best in franchise history, given that the pact has been a steal from the get-go. He broke out in earnest during the first year of it, turning in a 6.0-fWAR campaign, and hasn’t really slowed down since. Now coming off a 5.1-fWAR season (the fifth year of at least 5.0 fWAR in his career), Goldschmidt’s facing an uncertain future for the first time since signing his team-friendly contract.

The D-backs may well keep Goldschmidt through the winter and try to extend one of their all-time greats, regardless of whether they expect to bounce back from an 82-win season in 2019. But if the team doesn’t think it’s going to contend in the near future, or if it’s simply unable to come to terms with Goldschmidt, we may have seen the last of him in a Diamondbacks uniform.