Earlier this week, Ken Rosenthal of The Athletic reported via a rival executive that the Phillies are “shopping the hell” out of first baseman Carlos Santana.  The Rhys Hoskins left field experiment went poorly this year, so it’s logical for GM Matt Klentak to attempt to trade the veteran Santana to allow Hoskins to move back to first base in 2019. 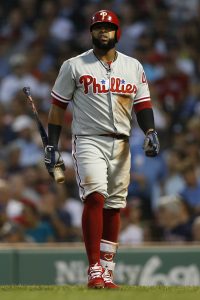 First, let’s take a look at what Santana is in this stage of his career.  He’s a switch-hitting walk machine with modest power.  He put up a 109 wRC+ for the Phillies this year, and 119 from May onward.  Steamer projects a 119 mark on the whole for Santana next year.  That’s a level he’s reached only once in the last four seasons, so it would be fair to question such optimism.

Though it’s an unscientific and more conservative guess, I’d expect 110-115.  Certainly if you’re a rival GM and Santana is being shopped to you, you’d take my position on his expected offense.  Santana has spent most of his time as a first baseman in recent years with the Phillies and Indians, and of course he’s an option at designated hitter as well.

Santana’s contract is a major factor in any potential trade.  He’s owed $35MM over the next two years.  Given Santana’s strong projection for next year, a case can be made that the Phillies shouldn’t need to pay his contract down significantly.  However, I think in reality there are enough cheaper alternatives on the market that the Phillies will have to kick in at least $10MM, or else take back a contract or attach a prospect.

For a look at the other first basemen available this winter, check out Jeff Todd’s market snapshot from last month.  The free agent market doesn’t offer any first baseman who qualifies as a definite regular, but the trade market could be robust.  Paul Goldschmidt is obviously superior to Santana, while Justin Smoak is a fairly similar hitter who is earning only $8MM in 2019.  Though better suited at DH, the Cardinals’ Jose Martinez is also in Santana’s class as a hitter.  Martinez has yet to reach arbitration and can be controlled for four more years.  I’m not convinced Jose Abreu and Brandon Belt will be on the move this winter.  The trade market at first base could also feature a variety of more flawed options, such as Justin Bour (now on waivers), Eric Thames, or Wil Myers.  The bottom line: the presence of Goldschmidt, Smoak, and perhaps Martinez could clog Santana’s market, as Goldy is an impact hitter and the others have more desirable contract situations.

There’s also the idea that a team with an established first baseman could acquire Santana to serve primarily as its designated hitter.  The DH trade market could include Kendrys Morales, Mark Trumbo, Shin-Soo Choo, C.J. Cron, Matt Davidson, and Miguel Cabrera.  As a hitter, only Cabrera is on Santana’s level, and he’s basically immovable due to his hefty contract.  The free agent market does offer one option that is superior to Santana as a DH: Nelson Cruz.  Cruz projects at a 132 wRC+ next year, and we expect him to sign for less than the $35MM owed to Santana.  So if you’re looking to fill a DH spot, you would talk to Cruz’s agent before you’d worry about trading for Santana – unless the Phillies offer to pay down Santana’s contract significantly.  You might also look at a player like Daniel Murphy, who carries a similar projection to Santana and should sign for less than $30MM.

If the Phillies are viewing Santana as mainly a contract dump, they might need to kick in $15MM to get him down to the equivalent of a two year, $20MM deal.  If the commitment was reduced that far, Santana might start to rise up on teams’ lists above someone like Murphy.  Here’s a look at the teams that could be a match for Santana this winter: