The Yankees have officially struck a deal to acquire lefty James Paxton from the Mariners, as Jeff Passan of Yahoo Sports (Twitter link) first reported. Top pitching prospect Justus Sheffield is coming to Seattle in return, per Ryan Divish of the Seattle Times (Twitter link). Completing the return are outfielder Dom Thompson-Williams and righty Erik Swanson, per Corey Brock of The Athletic (via Twitter).

This is the first major move of the winter market, bringing a top-shelf starter to a New York club that has long been rumored to be seeking to boost its rotation. Having already inked CC Sabathia earlier in the winter, the Yanks now appear unlikely to pursue more than one additional starter, though they’ll still have ample financial flexibility to go after any available pitchers.

Meanwhile, the M’s have now kicked off a winter in which they’ll attempt to walk a tightrope act of staying at least reasonably competitive while enhancing their roster’s long-term outlook. Paxton just turned 30 earlier this month, but he’s down to two more season of arbitration control, so he was one of the team’s more obvious assets to market. Previously, the club sent out regular catcher Mike Zunino, another player with two seasons to go until free agency. 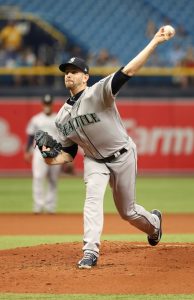 In adding Paxton, the Yankees aren’t just getting a highly talented pitcher. They’re getting one at an eminently reasonable rate of pay. MLBTR and contributor Matt Swartz project Paxton to earn $9.0MM this winter; if he turns in a great year, he’ll get a nice raise on that amount, but that would also mean the club would be more than happy to pay it. Ultimately, these salary levels land a far sight shy of Paxton’s open-market value — at least, that is, assuming he’s at full health.

At his best, Paxton is among the game’s most dominant rotation pieces. Aptly dubbed the Big Maple, the Canadian southpaw has struck out 11 batters per nine over the past two seasons while averaging a reasonable 2.4 BB/9. That’s rare air for a starter. His ERA ballooned a bit this year to 3.76, owing to a few extra long balls, but he posted a 2.98 mark in 2017. Plus, ERA estimators were quite enamored of his output in the just-completed campaign (3.24 FIP, 3.02 xFIP, 2.96 SIERA).

Of course, this all comes with a caveat. Paxton has never thrown a full MLB campaign, with his 28 starts in 2018 representing a career high. He also just barely (by a third of a frame) passed the 160 innings-pitched threshold for the first time last year. Health issues remain an ever-present concern and will perhaps dictate the outcome of this swap from the Yankees’ perspective.

The Yankees will hang their hat on the fact that Paxton mostly avoided significant injury issues in 2018. He missed time after being struck by a comebacker, which was obviously just an instance of poor fortune, after previously being sidelined for lower back inflammation. Those sorts of maladies aren’t the real concern, though. Previously, Paxton has missed time with forearm, shoulder, and biceps problems.

The good news is that Paxton has delivered a pristine version of his power arsenal when he has been able to unleash it. He has averaged 95.9 mph on his four-seamer over each of the past two seasons. And his swinging-strike rate is still on the rise, moving up to a personal-best 14.3% in 2018. If he can carry that forward, even if it’s not quite for a full 32-start campaign, the Yankees will likely be quite pleased with this move. 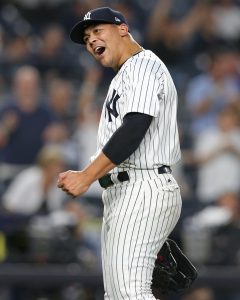 Turning back to the Mariners side, it’s still a bit difficult to know whether this portends quite a few more moves or whether the club will mostly pick around the edges from this point forward. Certainly, the organization has other marketable assets — as well as some under-water contracts that it might look to unload. It was only two weeks ago that we first learned of the Mariners’ somewhat surprising plans to move some key MLB assets this winter. The shape of the final roster remains very much in doubt, though GM Jerry Dipoto acknowledged today that the club is focused on a 2020-2021 window. (H/t TJ Cotterill of the Tacoma News Tribune, via Twitter).

It’s worth noting that, in both this and the Zunino swap, the M’s have brought back players who figure to represent near-term MLB contributors. If things break right, then, the club could rebound quickly. Here, the key asset is Sheffield, a 22-year-old southpaw who originally went to New York along with Clint Frazier in the swap that send Andrew Miller to the Indians. Scouts and prospect hounds alike have long loved Sheffield for his stuff. But questions remain as to whether he’ll every full command the full arsenal sufficiently to reach his ceiling at the game’s highest level.

It’s not as if Sheffield tends to have difficulties finding the zone. He has averaged only 3.4 walks per nine innings over his five minor-league seasons, which is hardly elite but also isn’t a concerning number, standing alone. But an inability to fully dictate the location of your pitches can obviously tell in other ways, particularly against major-league hitters.

Thus far, Sheffield has managed just fine with his explosive three-pitch mix, which is led by a fastball that occasionally edges into the upper-nineties. In 2018, he turned in a 2.48 ERA in 116 games at the Double-A and (mostly) Triple-A level. He also briefly debuted in the bigs; while things didn’t go well in his three relief outings, that hardly means much for the future.

While he’s not nearly so well-known as Sheffield, Swanson is also a near-term possibility for the Mariners’ active roster. He’ll need to take a 40-man spot from the jump, as he’d otherwise be eligible for the Rule 5 draft. The 25-year-old joined Sheffield at Triple-A this year after a dominant stop at the penultimate level of the minors to begin the season.

After arriving at the Yanks’ top affiliate, Swanson worked to a 3.86 ERA over 72 1/3 innings. He was touched for ten long balls, but otherwise impressed with 9.7 K/9 and 1.7 BB/9. Prospect watchers tend to view Swanson as a back-of-the-rotation possibility, rather than any kind of frontline starter, but that’d certainly be a welcome outcome for the Mariners.

Thompson-Williams, meanwhile, reached the High-A level last year at 23 years of age. He did turn in an impressive output there, slashing .290/.356/.517 and racking up 17 home runs and 17 steals in 375 plate appearances. That represented a big leap forward for the former fifth-round pick, so it remains to be seen whether he can continue to develop as he reaches the high minors.