December 28, 7:36pm: The Angels have agreed to a one-year, $3.35MM guarantee with free-agent catcher Jonathan Lucroy, who has already taken a physical, Jeff Passan of Yahoo Sports tweets. Jon Heyman of Fancred first reported the two sides were closing in on a contract. Lucroy, a client of Excel Sports Management, will have a chance to earn upward of $4MM on his new deal, according to Passan. 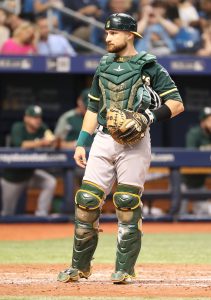 The 32-year-old Lucroy will stay in the American League West, where he played with the Rangers from 2016-17 and the Athletics last season. After a down 2017 split between Texas and Colorado, the former Brewers star had to settle for a one-year, $6.5MM guarantee with the A’s just a few weeks before the 2018 campaign started. Lucroy ended up drawing raves from his teammates and coaches in Oakland, which surprisingly earned a wild-card berth. However, he easily endured the worst statistical season of his career.

Once among the majors’ elite all-around backstops, Lucroy limped to a .241/.291/.325 line across 454 plate appearances last year. Of hitters who racked up at least 400 PAs, he ranked sixth from the bottom in ISO (.084) and ninth last in wRC+ (70), continuing an abrupt fall from grace for someone who was a formidable offensive presence as recently as 2016. Worsening matters, for the second straight year, the former pitch-framing darling had extreme difficulty as a defender, according to Baseball Prospectus. To Lucroy’s credit, though, he did throw out an above-average 30 percent of would-be base stealers.

Despite his issues over the past couple years, it appears the Angels will count on Lucroy to play an important role in 2019. The club entered Friday with no truly established options behind the plate, as Kevan Smith (497 major league PAs) and Jose Briceno (128) were the lone catchers on its 40-man roster. Given that Smith’s out of minor league options, it’s likely he has the inside track to back up Lucroy. But whether Lucroy’s a significant enough pickup for the Angels to stop seeking help at the position is debatable. In the event the Halos are content with Lucroy, Smith and Briceno, it’ll remove a suitor for the top free-agent catcher available, Yasmani Grandal, whom they’ve reportedly chased.

For the Angels, the Lucroy signing is the fourth notable move they’ve made in free agency this winter. The team previously inked first baseman Justin Bour and a pair of right-handers in Matt Harvey and Trevor Cahill – all of whom also received one-year commitments. The Angels have been linked to other free agents – including reliever David Robertson and infielder Josh Harrison on Friday – and considering they still have obvious needs, general manager Billy Eppler may not be done this offseason. For now, the Angels’ hope is that their quartet of free-agent additions will help provide a better supporting cast to the game’s foremost player, center fielder Mike Trout, as he heads into his penultimate year of team control. The Angels have managed just one postseason trip and zero playoff wins since the future Hall of Famer debuted in 2011, and they’re currently mired in a four-year drought.