The Cubs have acquired catcher Martin Maldonado from the Royals, Ken Rosenthal of The Athletic tweets. Left-hander Mike Montgomery’s going to Kansas City in the swap, Mark Feinsand of MLB.com reports. The teams have confirmed the trade. 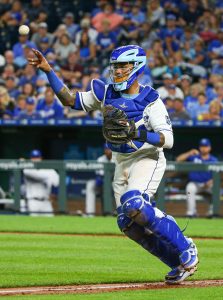 With Willson Contreras and Victor Caratini having combined to offer excellent behind-the-plate production in 2019, the Cubs don’t look like a fit for Maldonado on paper. However, Conteras is heading to the injured list with a strain of the arch muscle on his right foot, Sahadev Sharma of The Athletic was among those to report. The Cubs don’t expect Contreras to need longer than the minimum 10-day IL stint, Sharma adds.

Playoff-contending Chicago’s getting a capable stopgap in Maldonado, whom it showed interest in during the offseason. Maldonado chose against signing with the Cubs over the winter because he wanted to join a team that would offer him more playing time than he’d have gotten in Chicago. It proved to be a wise decision on Maldonado’s part. With Salvador Perez out for 2019, the 32-year-old Maldonado ultimately became Kansas City’s primary catcher after signing for $2.5MM guarantee a few weeks before the season.

Long known as a tremendous defender with a questionable bat, Maldonado lived up to his reputation with the Royals. In 261 plate appearances in KC, Maldonado hit .224/.288/.359 (71 wRC+) with six home runs. On the other end, he threw out an above-average 33 percent of would-be base stealers and earned quality reviews from Baseball Prospectus’ Fielding Runs Above Average metric.

In exchange for Maldonado, a soon-to-be free agent, the out-of-contention Royals are getting two-plus years of control over Montgomery. A swingman for most of his career and a full-time reliever this year, Montgomery, 30, will slot into the Royals’ rotation immediately, Jeffrey Flanagan of MLB.com tweets. He’ll also rejoin the organization that spent a first-round pick on him in 2008. Four years later, the Royals traded Montgomery to the Rays in a blockbuster that also included James Shields, Wade Davis, Wil Myers and Jake Odorizzi. 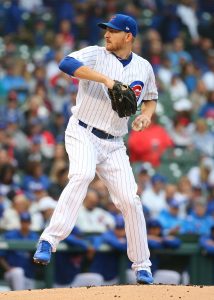 Montgomery never pitched for the Rays, instead joining the Mariners in a swap in 2015 – the year he made his major league debut. He lasted with the Mariners for approximately a season and a half, going to the Cubs in July 2016 in yet another deal.  A few months later, Montgomery earned the save in the Cubs’ historic Game 7 World Series win over the Indians.

Montgomery was effective even before his career-defining moment in ’16 and has largely fared well since, but his numbers have taken a significant turn for the worse this year. He logged a woeful 5.67 ERA/6.21 FIP with 6.0 K/9, 4.33 BB/9 and a 43.3 percent groundball rate over 27 innings in his final season with the Cubs.

Overall, Montgomery has pitched to a far better 3.72 ERA/4.21 FIP with 6.87 K/9, 3.47 BB/9 and a 53.9 percent grounder rate across 167 appearances and 56 starts in the majors. The Royals will hope he puts up numbers more in line with his lifetime marks as a member of their rotation, which lost veteran Homer Bailey in a trade with the Athletics on Sunday.

Meanwhile, the Cubs had already been in search of a left-handed reliever before trading Montgomery. Therefore, this deal could further put the onus on president of baseball operations Theo Epstein to acquire a southpaw by the July 31 deadline. With Montgomery on a $2.44MM salary this year, the Cubs added a small amount of payroll in this swap.