1:48pm: The Diamondbacks and Marlins have reportedly struck a deal involving two intriguing young players. Righty Zac Gallen is going to Arizona and shortstop Jazz Chisholm heading to Miami in return, according to reports from Jon Heyman of MLB Network (Twitter link) and Craig Mish of MLB Network Radio (via Twitter). 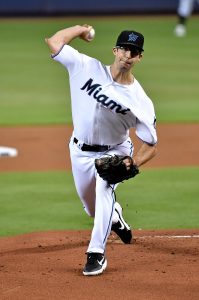 Both of these players have gone in different directions in 2019, evidently meeting in the middle in a sense. Gallen, who’ll soon turn 24, was seen as a solid but unspectacular prospect. Chisholm was widely regarded as a top-100 pre-MLB player leaguewide.

Gallen, acquired as part of the Marcell Ozuna swap, opened eyes with a dominating romp through the International League to open the year. Even as others were mowed down by a opposing hitters, buoyed by a newly long-flying baseball, Gallen carried a 1.77 ERA with 11.0 K/9 and 1.7 BB/9 through 14 starts.

It was still fair to wonder whether the relatively un-hyped hurler would find success at the MLB level. On the whole, his first seven starts have been a big success. He has allowed just 11 earned runs on 25 hits while recording 43 strikeouts and 18 walks. It seems Gallen’s stuff is playing just fine, as he’s generating a 12.1% swinging-strike rate.

As they sell at a relative high point on Gallen, the Marlins will buy at a low point on Chisholm. It’s not all that surprising to see the Miami club moving an arm for a position player, as the team has had greater success at transitioning its young hurlers to the majors. But taking a risk on Chisholm represents an interesting move.

Chisholm, a 21-year-old from the Bahamas, is lauded for his ability to stay at shortstop in the long term along with his upside at the plate. But he hasn’t quite followed upon his 25-homer 2018 campaign, which he polished off with a big run through the Arizona Fall League. Through 364 plate appearances this year at the Double-A level, Chisholm carries a .204/.305/.427 slash. While his walk rate is up to 11.3%, and he has popped 18 home runs and 13 steals, he’s also striking out at a worrying 33.8% clip.