1:45pm: The Athletics have formally announced the signing.

1:21pm: The Athletics and free-agent lefty Jake Diekman have agreed to a two-year contract with a club option for a third season, ESPN’s Jeff Passan reports (Twitter links). The Beverly Hills Sports Council client will be guaranteed $7.5MM over the life of the pact. 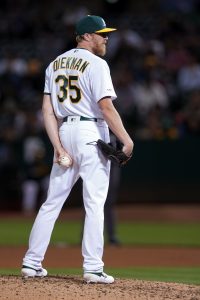 Diekman, 33 next month, inked a one-year, $2.75MM pact with the Royals last winter and was traded to the A’s prior to the July 31 deadline. The veteran southpaw pitched to a 4.43 ERA with 21 strikeouts but 16 walks and three hit batsmen through 20 1/3 innings with the A’s, continuing control problems that have plagued him for much of his MLB tenure. Diekman clearly made a strong impression on the Oakland organization, though, and he’s now in line to call it home for the next two seasons.

Control issues notwithstanding, the appeal in Diekman is easy to see, as his raw stuff is tantalizing. His 95.8 mph average heater is one of the fastest among all left-handed relievers in baseball, and Diekman’s overall 16.1 percent swinging-strike rate ranked 18th among 158 qualified reliever this past season. He’s averaged better than 11 strikeouts per nine innings pitched in his MLB career and fanned 28.2 percent of the hitters he’s faced in the big leagues. A look at his Statcast profile reveals that Diekman was one of the best in the game at limiting hard contact — specifically in allowing opponents to barrel up his offerings.

Diekman will pair with lefty T.J. McFarland, whom the A’s claimed off waivers last month and inked to a one-year deal to avoid arbitration yesterday, giving manager Bob Melvin multiple lefties to deploy in 2020. The Oakland ’pen will once again be anchored by emergent closer Liam Hendriks, with Yusmeiro Petit, Joakim Soria and rebound hopeful Lou Trivino adding to the setup corps as well.

The move to add Diekman comes just a day after Oakland traded Jurickson Profar to the Padres and non-tendered Blake Treinen, Ryan Buchter and Josh Phegley — substantially reducing payroll in the process; that quartet had been projected to earn a combined $17.6MM on a perennially low-payroll A’s club.

Some of those funds will be immediately reallocated to Diekman, it seems, but the Oakland payroll still projects to come in north of previous levels. Last year’s $92MM Opening Day mark was a club record, and the A’s projected to come in around $95MM even before bringing Diekman aboard. It’s always possible that they’ll move some veteran contracts, but the A’s at the very least appear poised for a second season above the $90MM mark, which is unheard of territory for the organization.