The Blue Jays continued what has become an increasingly busy offseason Monday, announcing a one-year deal with free-agent infielder Travis Shaw. The Pro Star Management client will reportedly secure a $4MM guarantee and earn $175K upon tallying 350 plate appearances, with another $125K for every 50 plate appearances accrued thereafter. The deal maxes out at a potential $4.675MM salary if Shaw exceeds 550 plate appearances. 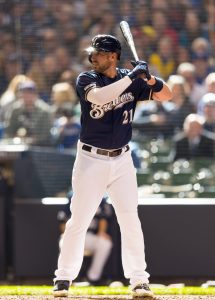 The Brewers non-tendered Shaw earlier this month. It was an eventful couple of weeks on the market for the 29-year-old, who drew some interest from almost half the league. It’s not hard to see the appeal, since Shaw recently looked like a long-term building block in Milwaukee. From 2017-18, Shaw combined for a .258/.347/.497 line (119 wRC+) while playing nearly every day at the hot corner. He hit 30+ home runs in each season while drawing a fair number of walks with a manageable strikeout rate. Over his first two seasons as a Brewer, he was worth 7.1 fWAR.

Of course, the wheels fell of completely in 2019. Shaw stumbled to a ghastly .157/.281/.270 line (47 wRC+) over 270 plate appearances last season. Among those with at least 250 plate appearances, only Mike Zunino was worse at the dish. Shaw continued to draw his share of walks, but his contact rate fell precipitously. Consequently, his strikeout rate almost doubled from 18.4% to 33.0%. The contending Brewers couldn’t afford to let Shaw sink or swim, and they demoted him to Triple-A San Antonio in June.

To his credit, Shaw tore the cover off the ball following his demotion. His .286/.437/.586 slash was eye-opening, even in the hitters’ haven Pacific Coast League. Most importantly, Shaw seemed to get his strikeout troubles under control back in the minors.

Nevertheless, the Brewers elected not to bring Shaw back at his projected $4.7MM arbitration salary in light of his MLB struggles. Milwaukee did offer him a contract of some sort before non-tendering him (presumably for less than his arbitration projection), tweets Jon Heyman of MLB Network, but Shaw decided to seek a change of scenery.

While Shaw falls a bit shy of that $4.7MM projection on his guarantee from the Jays, he has a strong chance at approaching the mark via his incentives. Shaw exceeded 550 plate appearances in each of 2017 and 2018, and he’s in line to start nearly every day at first base next season, tweets Scott Mitchell of TSN. That’ll leave the hot corner to Vladimir Guerrero, Jr. north of the border. Shaw replaces Justin Smoak, who coincidentally signed a very similar one-year, $5MM deal with the Brewers earlier in December.

Whether or not future additions to the lineup are forthcoming, the Jays are betting on a Shaw return to form. Shaw’s plate discipline remains intact and last season’s 88.7 MPH average exit velocity, per Statcast, is right in line with his career marks. Shaw will certainly need to rebound in the contact department. His track record and age, though, give reason for cautious optimism. If Shaw does rediscover his form at the plate, he could return to Toronto in 2021. He has accrued 4.053 years of MLB service, meaning he’ll be arbitration-eligible again next offseason. He’ll certainly hope to enter that process on the heels of a better showing than he put forth in 2019.