The Brewers have announced a one-year deal with lefty Brett Anderson. The GSE Worldwide client will be guaranteed $5MM with up to $2MM in potential incentives, per ESPN.com’s Buster Olney (via Twitter).

Anderson, who his closing in on his 32nd birthday, becomes the latest addition to the Milwaukee pitching staff. The club recently agreed to terms with Josh Lindblom. 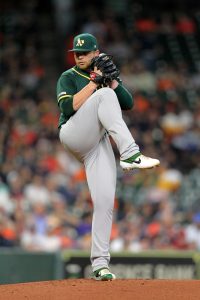 This probably isn’t the high-impact rotation move some would like to see the Brewers make. But that has simply not been the way GM David Stearns has operated.

Anderson did put in a strong effort in 2019, throwing 176 innings of 3.89 ERA ball over 31 starts with the Athletics. He averaged just 4.6 strikeouts per nine, but was quite stingy with the free passes (2.5 BB/9) and delivered a typically strong 54.5% groundball rate.

It remains to be seen just what role Anderson will occupy. With the Brewers’ flexible approach to deploying pitchers, it’s possible that he will start but perhaps not be asked to go deep into games. In 2019, opposing hitters ramped up against Anderson as the game went on, with >100 OPS point jumps each time through the order (.631, .735, .841).