The Rangers have reached an agreement with free-agent right-hander Jordan Lyles, pending a physical, Ken Rosenthal of The Athletic reports. It’ll be a two-year, $16MM contract for the Ballengee Group client, per Jeff Passan of ESPN. Lyles did not crack the top 50 of MLB’s best available free agents entering the offseason, making this significant payday all the more surprising. 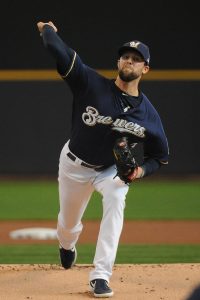 This is the second major starting addition this offseason for the Rangers, who previously signed fellow righty Kyle Gibson to a three-year, $28MM deal. He and Lyles will presumably join high-end holdovers Mike Minor and Lance Lynn to comprise four-fifths of the Rangers’ rotation in 2020, while Kolby Allard figures to have the inside track on the last spot in their staff.

This type of deal for Lyles would have been unthinkable just a couple months ago. The 29-year-old struggled through the first half of 2019 as a member of the Pirates, with whom he posted a dismal 5.36 ERA across 82 1/3 innings. But Lyles turned his season (and maybe his career) around after the Brewers acquired him from the Pirates before the July 31 trade deadline. The Milwaukee version of Lyles put up a stellar 2.45 ERA over 58 2/3 innings, though the rest of his numbers weren’t really all that impressive. Lyles logged 9.8 K/9, 3.6 BB/9 and a 4.79 FIP as a Pirate, and he recorded 8.6 K/9, 3.4 BB/9 and a 4.42 FIP after heading to the Brewers.

Lyles will have to keep proving he’s for real, but his pact with the Rangers continues a nomadic career. A first-round pick of the rival Astros in 2008, Lyles pitched for five different major league clubs before agreeing to sign with the Rangers. As that fact suggests, Lyles hasn’t been particularly effective in the majors, but the Rangers are prepared to bank on him as a solid mid- to back-end starter over the next couple years. And the Lyles pickup further indicates the Rangers are hoping to break their three-year playoff drought in 2020, when they’ll open a new stadium. He and Gibson are now in tow, and Texas has shown interest in top free agents such as third basemen Anthony Rendon and Josh Donaldson. They were also part of the sweepstakes for Zack Wheeler, Cole Hamels and Howie Kendrick before they signed elsewhere.