JANUARY 7: This deal is now official.

JANUARY 3: The Nationals have a deal with infielder Starlin Castro, according to Ken Rosenthal of The Athletic (via Twitter). It’s a two-year arrangement, per Joel Sherman of the New York Post (Twitter link). The deal promises the Magnus Sports client $12MM, per Jeff Passan of ESPN.com (via Twitter). 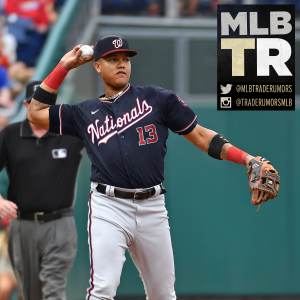 Castro will be tasked with handling second base for the defending World Series champs. Fellow free agents Brian Dozier and Asdrubal Cabrera handled most of the work at that position last year in D.C.

The Nationals have seen plenty of Castro over the past several seasons, as he has appeared with the division-rival Marlins. He has had ups and downs over the years, but has always showed up — averaging 149 games per season since 2011 — and typically delivered a useful combination of league-average offensive production and average glovework. Poorly graded baserunning has long been a bit of a drag on his overall value.

It’s not an exciting signing, by any stretch, but does check a box for the Nats. And perhaps the club sees reason to hope for a bit more out of Castro. He’s still just 29 years of age and vastly increased his offensive productivity in the second half of the 2019 campaign. In his final 285 plate appearances of the year, he slashed a hefty .302/.334/.558 with 16 long balls. He’s never going to draw many walks, so the question is Castro can continue to make better contact — both harder and higher — and thus maintain a meaningful portion of that second-half power outburst.

Even if Castro enters the season as the presumptive second baseman, he could ultimately move into a more flexible role — especially if top prospect Carter Kieboom forces his way into an everyday role. Castro has plenty of experience on the left side of the infield and could become part of a timeshare at third base if that becomes desirable (whether in the first or second year of the deal). Castro would pair well with a lefty hitter, as he has long been much more dangerous against southpaws.

As things stand, the Nats would rely upon the switch-hitting Wilmer Difo to spell Castro and shortstop Trea Turner. The team could pursue an upgrade over Difo. It might also add a more offensive-oriented player who can spend time at first base. There could be some overlap there, as well. The team’s ultimate moves at third base — Josh Donaldson remains the chief target, with a few major trade candidates also possible — may end up dictating the finishing touches on the bench. Whether or not Ryan Zimmerman ends up returning will also be a factor.