The Blue Jays have acquired lefty Robbie Ray from the Diamondbacks, tweets Rob Longley of the Toronto Sun.  The D’Backs will receive southpaw Travis Bergen in return, according to Shi Davidi of Sportsnet.ca.  Arizona will also be sending over $300K in cash, according to Nick Piecoro of The Arizona Republic.  Ray has approximately $1.42MM left on his contract this year. 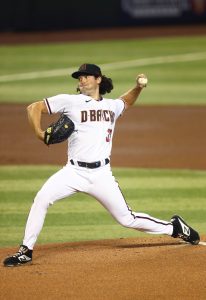 Ray, 29 in October, has pitched the vast majority of his career for Arizona after they acquired him in a December 2014 three-team trade.  He’s long been one of the game’s top strikeout pitchers, with an 11.9 K/9 mark that ranks third in MLB for qualified starters from 2016-19.  Never known for his control, walks have become problematic at times for Ray.  The issue has been particularly bad in this brief 2020 season, as Ray has issued free passes to more than a fifth of the batters he’s faced, easily the highest rate in MLB this year.  The result has been an unsightly 7.84 ERA, through seven starts, well out of line with his career work.  Ray will be eligible for free agency after the season, and in light of his performance this year, it’s unlikely the Diamondbacks would have been willing to issue a qualifying offer.

At present, the 18-14 Blue Jays are in line to qualify for the playoffs for the first time since 2016.  Ray marks the second addition to Toronto’s rotation in five days, as Executive Vice President, Baseball Operations & General Manager Ross Atkins added Taijuan Walker from the Mariners last Thursday.  Atkins has assembled a veteran group, which also includes offseason pickups Hyun-Jin Ryu, Tanner Roark, and Chase Anderson.  Matt Shoemaker went down last week due to a lat strain, while uber-prospect Nate Pearson went on the shelf on August 19th for a flexor strain.  That pair hopes to return this year, while Trent Thornton is out for the season with an elbow injury.  The club will hope pitching coach Pete Walker can diagnose Rays’ control issues and help him bounce back over the season’s final month.

Today will mark the third time in Ray’s career he’s received that life-changing phone call from his GM informing him of a trade.  After being drafted by the Nationals in the 12th round in 2010, Ray was the centerpiece of the deal that sent Doug Fister from the Tigers to the Nats in 2013.  Just a year later, Ray landed with the Diamondbacks in a deal that sent Didi Gregorius to the Yankees and Shane Greene to the Tigers.  Ray blossomed into a fine pitcher for the D’Backs, putting together four separate seasons of at least 2.3 WAR and snagging an All-Star nod and seventh-place Cy Young finish in 2017.  By the 2018-19 offseason, Ray was a regular on the rumor circuit, but Executive Vice President & General Manager Mike Hazen didn’t pull the trigger until today, with most of the lefty’s trade value lost.

Bergen, 27 in October, was drafted by the Jays in the seventh round in 2015 out of Kennesaw State and has been used mostly in relief in his pro career.  Though the Giants picked up Bergen in the 2018 Rule 5 draft, they wound up designating him for assignment and returning him in August of last year after he returned from an IL stint for a shoulder injury.  His fastball ticked up to 93.7 mph this year for the Jays, more than three miles per hour than he showed in his rookie campaign.  But with all due respect to Bergen, it would appear this trade was mainly about salary relief from Arizona’s standpoint.